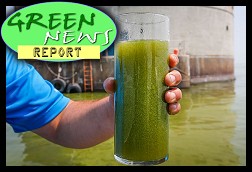 IN TODAY'S RADIO REPORT: Drinking water ban in Ohio's 4th largest city is over --- for now; Mine waste breach means British Columbia's water crisis is just beginning; California state of emergency over wildfires; Bee-killing pesticide now found in U.S. rivers; PLUS: Trees save lives ... All that and more in today's Green News Report!

IN 'GREEN NEWS EXTRA' (see links below): CO compromise removes anti-fracking measures from ballot; First 100°F Temperature on Record in the Baltics; Acidifying oceans killing oyster industry in the Pacific Northwest; The science behind the rise of deadly flesh-eating bacteria in the U.S.; Beijing to ban coal; 'Otherworldly' deluge causes deadly landslide in India; First-ever precip recorded in SoCal in August; Religious leaders call pollution 'an affront to God' ... PLUS: Texas V. EPA: Who in Texas wants tighter refinery regulation? ... and much, MUCH more! ...


“It is prudent not to dismiss the possibility that the Earth System – the biosphere – could die if critical thresholds are crossed … Humanity’s well-being depends upon complex ecosystems that support life on our planet, yet we are consuming the biophysical foundation of civilization … Scientists need to take greater latitude in proposing solutions that lie outside the current political paradigms and sovereign powers …

(Origin of the Classic Nuclear Bully - 3). August 6, 1945 was a record setting day for killing school children in an instant.

Killing all school children by killing their life support system would break the record.