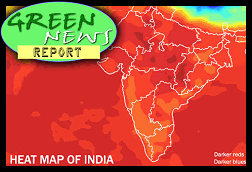 IN TODAY'S RADIO REPORT: GOP Leader Eric Cantor defeated by climate denier who doesn't want you to know that he's a denier (and for good reason); Australia sees hottest 2 years on record, but their Prime Minister is a global warming skeptic; Historic heat results in riots in India; PLUS: Tesla is giving away its secrets --- for free!... All that and more in today's Green News Report!

IN 'GREEN NEWS EXTRA' (see links below): "Supercritical" breakthrough for solar energy, 'like breaking the sound barrier'; Americans 2-to-1 would pay more to curb climate change; Scary hurricane record broken in Pacific; Google aims to re-invent electric utility sector; Tests prove fracking contaminated water in Texas' FDA advises pregnant women to eat fish, but avoid mercury; How El Nino 2014 will affect world weather .... PLUS: Kiriabit's president: 'it's too late for us' ... and much, MUCH more! ...

A new feedback loop in Antarctica?