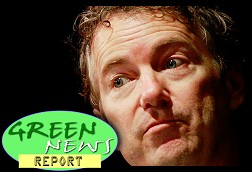 IN TODAY'S RADIO REPORT: Republicans attack Obama EPA's proposed CO2 emissions standards... but they were FOR emissions cuts before they were against them; Good news for endangered wolves; PLUS: Los Angeles oil spill exposes gaping hole in pipeline oversight ... All that and more in today's Green News Report!

Costs of damage by climate change have quadrupled so the coal power plant emission reductions are de minimus.