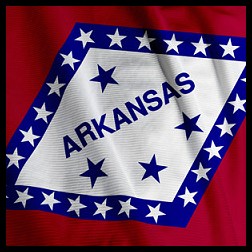 The Arkansas Supreme Court has tossed a ruling by a lower court judge who had found the state's Photo ID voting requirement to be in violation of the state Constitution. The high court did not, however, rule on the constitutionality of the law, finding only that Circuit Court Judge Tim Fox "erred" by going too far in his ruling, as the issue of the law's Constitutionality "was not properly before the circuit court."

Late last month we described Fox' decision [PDF], declaring the state's Republican-enacted Act 595 "null and void" and "unconstitutional in that it violates Articles 3, Section 1 and Article 3, Section 2 of the Arkansas Constitution."

Those sections of the state Constitution describe both the "Qualifications of Electors" as well as the "Right of Suffrage," stating that "Elections shall be free and equal. No power, civil or military, shall ever interfere to prevent the free exercise of the right of suffrage; nor shall any law be enacted whereby such right shall be impaired or forfeited, except for the commission of a felony, upon lawful conviction thereof"...

But the original case on which Fox was ruling was a challenge to a rule concerning absentee ballots. Unlike most Republican Photo ID restrictions being enacted around the country, Arkansas' law --- which was originally vetoed by Democratic Gov. Mike Beebe, before being overridden by Republicans in the legislature --- applies to absentee voters, as well as to those who vote in person.

Voters who are unable to show state-issued Photo ID when voting at the polling place are allowed until the Monday following the election to appear at county election headquarters with the appropriate ID, or to sign a statement declaring themselves too "indigent" to afford one. The state does not provide free IDs to such voters.

Act 595 also required absentee voters to supply a photocopy of ID with their ballot. However, unlike the strict Photo ID requirement for in-person voting, absentee voters are allowed to send "a copy of a current utility bill, bank statement, government check, paycheck, or other government document that shows the name and address of the voter."

The case on which Fox had ruled last month regarded extending the time for absentee voters who failed to include ID with their ballot to the Monday after elections, akin to the statutory allowance for polling place voters. The allowance for absentee voters had not been included in the law's statutory language and was being challenged by the Pulaski County Election Commission after it had been added as an "Emergency Rule" by the state of Board of Elections Commission.

As we noted in our original report on Fox' decision, instead of ruling only on that point, the judge struck down the law in its entirety, finding the entire Act in violation of the state Constitution. The AR Supremes reversed that finding, noting in their ruling that the law's Constitutionality "was not pled or developed before the circuit court."

"We have held that we will not strike down a legislative act on constitutional grounds without first having the benefit of a fully developed adversarial case," the court's majority declared.

Thus, the state high court ruled that Fox' decision was overly broad and that he did not have the authority in this case to strike down the entirety of the law. They declined to rule themselves on the statute's Constitutionality.

As AP notes, "Fox has also ruled the law unconstitutional in a separate case, but said he wouldn’t block its enforcement during this month’s primary. That ruling is also being appealed to the high court."

While the state Supremes nixed Fox' ruling on the Photo ID law itself in the absentee ballot case, they declined to stay his decision striking down the added time for absentee voters to comply with the statute's ID requirements.

Separately, the ACLU has filed a federal challenge to Arkansas' Act 595. That case is still pending.

Last month, the ACLU was successful in a similar federal challenge to the constitutionality of Wisconsin Republican's polling place Photo ID, as a District Court judge found WI's version in violation of the U.S. Constitution and the federal Voting Rights Act. Republican Governor Scott Walker and the other named defendants in the case there, have now filed a formal notice [PDF] that they intend to appeal Judge Lynn Adelman's meticulously crafted 90-page decision [PDF] to the 7th Circuit Court of Appeals. The WI law had also previously been found a violation of their state Constitution in two separate cases. Those cases are now pending appeal before the WI state Supreme Court.

Today's latest twist and turn on the Photo ID restriction roller coaster comes amid a number of recent rejections of similar laws in both state and federal courtrooms, as well as pending federal challenges by the U.S. Dept. of Justice against such laws in states such as Texas and North Carolina.

In virtually every legal challenge to date, proponents of such laws have been unable to offer evidence of virtually any type of polling place voter fraud that might be deterred by such laws. That, despite claims by Republicans that such laws are needed to prevent voter fraud. In the meantime, opponents of such laws argue that some 21 million legally-registered American voters don't have the type of Photo ID required to vote under such laws and courts have found that minority and poor voters would be amongst those far more likely to lose their right to vote under such restrictions.

As Judge Adelman noted in his Wisconsin decision after finding that some 300,000 otherwise legal voters in the state would have their right to vote imperiled under the GOP law, in fact it would "prevent more legitimate votes from being cast than fraudulent votes."

Today's ruling in Arkansas is almost certain to sow still more confusion for voters in the state, where early voting has already begun in advance of next Tuesday's statewide primary elections.

* * *
Please help support The BRAD BLOG's fiercely independent, award-winning coverage of your electoral system --- now in our ELEVENTH YEAR! --- as available from no other media outlet in the nation...

How can a judges ruling go too far, when he says it is unconstitutional to have a law that potentially limits the number of people voting legally when in their constitution it says, "Elections shall be free and equal. No power, civil or military, shall ever interfere to prevent the free exercise of the right of suffrage; nor shall any law be enacted whereby such right shall be impaired or forfeited, except for the commission of a felony, upon lawful conviction thereof"...
If there cannot be any interference with voting how can a photo ID law be enacted constitutionally?

The court's ruling was based on their (accurate) assertion that Constitutionality "was not pled or developed before the circuit court."

"We have held that we will not strike down a legislative act on constitutional grounds without first having the benefit of a fully developed adversarial case," they wrote.

I've now updated the story a bit, with some of those quotes from the court majority's ruling.

Thanks brad. This makes more sense. It's more of a procedural strike down than a legal/precedent setting decision.

I wonder what people think of this:

"Forty years ago, at a point when Americans were profoundly concerned about declining voter participation, democracy advocates proposed a fix: “instant voting.”

To remove barriers and increase participation in elections, the argument went, officials should make it possible for citizens to show up at a polling place, register to vote and then cast a ballot."

Seems weird, but, looks interestin reading about it.