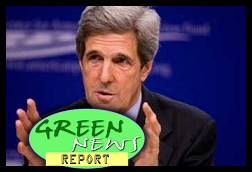 IN 'GREEN NEWS EXTRA' (see links below): Drill next door: Here’s what it looks like when fracking moves in; Warming helping crop pests' spread; Fox News wonders what's eroding our beaches; Hunter shoots the first endangered wolf seen in Kentucky in 150 years; US government paid $17B for weather-related crop disasters last year; CNBC: Animals will "snuggle" under Keystone XL Pipeline; CT takes on wood furnaces; Lead poisoning killing wildlife; Pollution, not rising temperatures, may be melting the Alps; Dogs the newest scientific measuring equipment ... PLUS: Scientists leave GOP due to attitudes toward science ... and much, MUCH more! ...

2. Members of culturally opposing groups distrust each other when they perceive their status is at risk in debates over public policy.

3. When facts become entangled in cultural status conflicts, members of opposing groups (all of whom do trust scientists) will form divergent perceptions of what scientists believe.