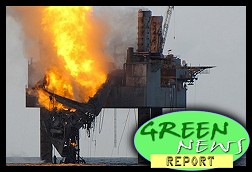 Congressional republicans decided they were going to prebutt the president's big speech today by announcing ahead of the speech that their plan on energy in the environment is to cut the budget of the epa by a third. Oh, yeah, environmental protection, who needs it, especially now. house republicans ahead of president obama's big speech today moved to cut funding to the epa by 34%. And while the president is insisting that americans reduce carbon emissions, republicans included provisions in their bill today to block the epa from controlling carbon emissions. house republicans while they were at it, voted to slash the president's funding request for renewable energy. I know everybody says slash whenever they're talking about 2% cuts or whatever, look at this, it's a 72% cut for renewable energy. that's slashed. The top republican in the house appropriations committee laughed about it to reporters, saying, his priorities are going nowhere.

In helps one to "understand" the deniers who want to cut the EPA by a third as your link indicates Des.