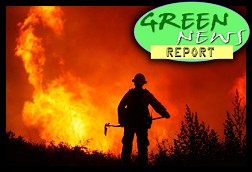 IN 'GREEN NEWS EXTRA' (see links below): The ‘Social Cost Of Carbon’ Is Almost Double What The Government Previously Thought; Invention could wrap buildings in solar panels; World’s Biggest Coal Company Is Turning To Solar Energy To Lower Its Utility Bill; USDA helping farmers adapt to climate change; AFP targets Dems over non-existent carbon tax; LED lightbulbs saved $657m this year; Study: trash litters ocean floor ... PLUS: The Most Important Day of the 21st Century ... and much, MUCH more! ...