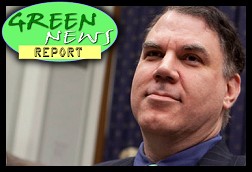 A lot of deniers claim that the climate is always changing and thus no global warming problems.

Yes, what they say is true about the global climate system always changing, however, they do not know what that means.

This explains what it means (On The Origin and Future of Nomads).

They conflate and confuse "damage" with "change."

A lot of us NEVER denied the climate was being changed. Just we argued by WHOM...

That is your failure. Failure to seek the truth as opposed the United Nations Agenda 21.

PS: how do you sue NATO?

Interesting comment, Phil. Please elaborate as to what part of the UN's non-binding, voluntary 1992 sustainability planning document you feel overturns basic physics and chemistry, and the entirety of climate science over the last 150 years. Page numbers or quotes would be helpful for our readers to investigate for themselves the veracity and scientific integrity of your claims.

« PREVIOUS STORY "Fox 'News' and Republicans Were For Prosecuting Journalists Before They Were Against It"
» Go to The BRAD BLOG front page «
"Greenwald Responds to BRAD BLOG Commenter Charge That He 'Lied' About James Rosen Case" NEXT STORY »
See MSVL and support BRAD BLOG! Click here for signed premium version!