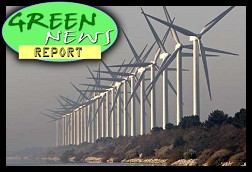 IN TODAY'S RADIO REPORT: Hysterical Fox 'News' flip-floppery on Tesla; Consensus strikes again: 97% of climate scientists say global warming is man-made, but the public thinks it's evenly split; CO2 levels pass 400ppm; You're already paying a 'disaster tax'; PLUS: Thanks to renewable energy, one town now has too much money ... All that and more in today's Green News Report!

IN 'GREEN NEWS EXTRA' (see links below): Explosive pig poo foam!; Supreme Court rules for Monsanto; Floods could overwhelm London barriers; Conoco-Philips CEO admits humans cause global warming - but is against getting off oil; Interior Dept issues new fracking rules; Ernie Moniz confirmed as Energy Secretary; Stephen Chu wishes he'd accomplished more on climate change; Japan takes first step to a permanent reactor shutdown after Fukushima ... PLUS: Vote with your wallet in the supermarket? There's an app for that ... and much, MUCH more! ...

« PREVIOUS STORY "'Misconduct'?: What's NOT in the Inspector General's Report on IRS Identifying 'Tea Party' Groups for Additional Tax-Exempt Scrutiny"
» Go to The BRAD BLOG front page «
"Since the GOP Isn't Telling You: Federal Budget Deficit Shrinks by Half Since Obama Took Office" NEXT STORY »

The problem is that their published policy is not designed to prevent the ice sheet melt or the demise of the ecosystem.

The Obama Administration policy is to drill baby drill a la Palin, once the ice melts.

Even Bush II steered clear of that debacle.