"When you let university administrators or other employers rather than women and their doctors dictate whose medical needs are legitimate and whose are not, a woman’s health takes a back seat to a bureaucracy focused on policing her body." - Georgetown Univ. Law Student, Sandra Fluke 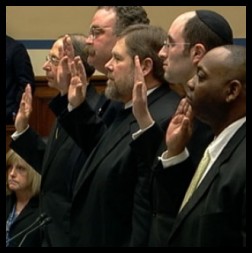 One unfortunate aspect of the firestorm surrounding Rush Limbaugh's profoundly uninformed, deceptive and misogynistic vitriol and calls for accountability for the Rightwing radio blowhard, is that it has completely overshadowed the substance of Fluke's testimony on the importance of access to prescription contraceptives to women's health.

The Limbaugh firestorm has also overshadowed the fact that the American Taliban (aka the elected Tea Party House Republicans) prevented Fluke from testifying at a House Oversight Committee hearing, framed by the Republican majority as a hearing on "religious freedom", because, as the Washington Post described, "she was not a member of the clergy."

Indeed, while much is made of the fact that the first panel at the 2/16/12 House Oversight Committee examining an issue vital to women's health was all-male, few have taken note that it was also all-clergy. In opening the hearing, Committee Chairman Darrell Issa (R-CA) announced: "Today, the committee will hear testimony from leaders of different faiths."

Not only did the right-wing GOP House leaders fail to so much as recognize Fluke's right to be heard, but, according to Minority Leader Nancy Pelosi (D-CA) (see video embedded in above-linked Washington Post article), they also refused to permit House Democrats to use the House Recording Studio as part of an effort to try and prevent the public from seeing and hearing Fluke's testimony at all. Instead, Pelosi and the Democrats of the Democratic Steering Committee were forced to hold a separate, unofficial "forum", in order to hear Fluke's testimony.

The video of Fluke's opening statement, the testimony that Republicans sought to prevent from being heard at all, is now posted below.

But it is the larger, arguably more disturbing constitutional ramifications of the actions of House Republicans that we'd like to take a moment to highlight on, as they have been almost entirely overlooked in this unnecessary brouhaha...

The DoJ is said to be calling for a trial in the D.C. court, where the state of Florida had previously filed suit in order to avoid the federal "preclearance" process under the Voting Rights Process for its new restrictive election laws. The new laws institute harsh penalties for third-party voter registration organizations and individuals who fail to turn in new voter registration forms to elections officials within 48 hours of them being completed. The statute would also cut early voting hours nearly in half.

Over the past several months, a number of high-school teachers, incredibly enough, have been charged under the new law for registering their own students to vote. Last November, MSNBC's Rachel Maddow covered the topic in an interview with the Supervisor of Elections of Volusia County, FL, who, though she is a Republican, said she felt "sick to her stomach" after being forced to turn in one of those teachers to law enforcement officials.

On Thursday night, Comedy Central's The Colbert Report ran a somewhat more amusing, if equally disturbing, take on the issue, focusing on one of the teacher's snagged by Florida law enforcement for "voter registration fraud" under the draconian new restrictions...

Section 5 the Voting Rights Act (VRA), requires certain jurisdictions, including parts or all of 16 different states with a history of racial discrimination, to receive "preclearance" from the DoJ for all new election-related laws, or otherwise receive approval for the new laws from the federal district court in D.C. During the DoJ preclearance process for Florida's new laws, the agency requested more information about them from the state, which includes five difference "covered" counties. Instead of responding, Florida decided to avoid DoJ judgment all together by taking their case directly to the D.C. court instead.

According to TPM's Reilly, the DoJ stated in their filing in that same court last night...

I was on The Young Turks' panel show The Point this week. "Sexy Liberal" comedian (and one of your best bets on Twitter), John Fugelsang, was guest-hosting for Cenk Uygur and the show was largely election and voting related. So, as you can imagine, occasionally, I had an opinion or two.

Topics ranged from Rocky Anderson to Ron Paul to why elections are held on Tuesday and if they still should be, among other things. The other panelists (both Right-leaning) included PJTV's Alexis Garcia and comedian Avi Liberman. Enjoy!...

UPDATE 3/2/12, 9:40am PT: "The Amazing Atheist's" legion of fans (yes, he's some sort of YouTube star, as noted during the show) are furious with me, apparently, for my remarks directed towards TAA's comments in his video clip as seen during the show above. They have taken to YouTube comments to express their derision, including many on my lack of understanding of our system of democracy, etc, etc. BTW, to be fair, since I didn't get to specifically answer the Electoral College question during the panel discussion, and otherwise wasn't able to fully expound on my third-party thoughts there (and neither was TAA able to respond directly at all to any of our thoughts, due to the way the format works on The Point), I've let TAA, as well as the The Young Turks folks know that I'm more than happy to go one-on-one with TAA and his legion of followers live, anytime, if they are ever interested and feel like hosting such an affair. 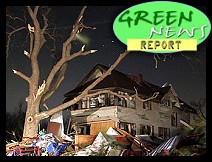 On the day that news of Sen. Ted Kennedy's death hit after decades of service to his nation, Andrew Breitbart took to Twitter to call him a "duplicitous bastard," "a prick," and, "a special pile of human excrement."

Breitbart died here in Los Angeles last night, reportedly of "natural causes," sometime after midnight. He leaves behind a wife and four children. He was 43.

His legacy will speak for itself. It need not be embellished. Though, undoubtedly, it will be. Just not by us. We don't do that here.

We've covered his work honestly, accurately and fairly over the years in more articles than we care to remember and certainly more than we cared to write. It was a courtesy he did not reciprocate. Each time we wrote about him or even spoke of him, it was reluctantly, as it is today. Our interest in Breitbart was never in him, no matter his, or his followers, misguided beliefs to the contrary. Our interest was only in the failures of the mainstream corporate media that he, ironically enough, helped to highlight, and in our hopes of standing up for those he'd harmed.

While pretending to point out "liberal media" bias, what Breitbart ultimately served to do was highlight the corporate media's cowardice, laziness and penchant for trusting in scoundrels. Oddly, that may have been exactly what he wanted to do --- just not in the way he had hoped...