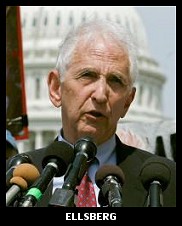 In early 2008, as I noted over the weekend, Ellsberg wrote an op/ed for The BRAD BLOG in which he noted:

Many, if not most, covert operations deserve to be disclosed by a free press. They are often covert not only because they are illegal but because they are wildly ill-conceived and reckless. "Sensitive" and "covert" are often synonyms for "half-assed," "idiotic," and "dangerous to national security," as well as "criminal."

Those comments, and ones from JFK in 1961 which I also posted in the same weekend article, in which he calls "the very word 'secrecy'...repugnant in a free and open society", seem to offer a bit of perspective on these recently released documents. I'll ask Ellsberg about those comments, and much more today --- including his support for Assange and his recent assertions, prior to the WikiLeaks release of hundreds of thousands of Iraq War Logs last that month, that he's been waiting for such a release of documents for 40 years.

POST-SHOW UPDATE: The audio from the complete hour today follows. It includes a bit of my own commentary on Ellsberg and the WikiLeak situation in the first half hour --- along with a check-in from Cary Harrison (the show's regular host who I was filling in for today) on World Aids Day. My interview with Ellsberg begins at approximately the :34 mark.

I spoke with Ellsberg, a bit, after the show to follow up on a few points, particularly concerning Hillary Clinton, and hope to have an article a bit later on both the on-air interview, as well as some of the points we discussed aftewards.

For now though, here's the complete hour, including the full on-air interview (Text transcript of the Ellsberg interview is now posted here.)