A big tactical move today by Sen. Barbara Boxer (D-CA) in the Environment and Public Works Committee, which she chairs, in working around the Republican boycott this week of mark-up on the climate legislation bill. Very smart, and a big twist in that story as she's out-foxed the GOP stallers, obstructionists, and denialists! At least for now.

Check out Boxer's surprise move, and get caught up on where the roller coaster ride of climate legislation in the U.S. Senate stands for the moment, in today's Green News Report! 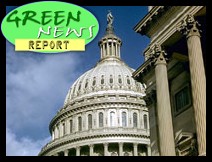 IN TODAY'S AUDIO REPORT: The German Chancellor goes green in the U.S. Congress ... PLUS: Ups and downs, high drama, and a huge twist in the roller coaster of Senate climate legislation ... All that and more in today's Green News Report!

Comments Off
Article Categories: Green News
Frank Schaeffer: I'm Now a 'Liberal' Because I'm a Conservative
By Frank Schaeffer on 11/4/2009 11:39am PT

I grew up in a fundamentalist missionary family that in the 1970s and 80s morphed into my father's activity as one of the founders of the Religious Right. We would hobnob with Republican leaders from Ronald Reagan to Gerald Ford and the Bush family, Jack Kemp and many others. One day it dawned on me that the far right of the Republican Party --- in other words its base --- actually hates America.

The Religious Right reveled in rising crime statistics, "family breakdown" statistics, failing public schools and so forth. As I explain in my book Patience with God: Faith for People Who Don't Like Religion (or Atheism)

, if crime started going down, or public school test results started going up --- without the country "turning back to Jesus" --- then that would prove that somehow "we" were wrong.

We wanted our country to fail because it had "turned away" from what we believed to be true.

Combined with the fact that we began to lose parts of the culture war, when it came to other Americans beginning to recognize gay rights, expanding women's rights, abortion rights and such, the Religious Right and the Republican Party infected gun-toting America with a chip on its shoulder about a mile wide. This led to the myth that "they" (fill in the blank, gays, Jews, blacks, liberals --- whatever) are "taking away our country from 'us'"...

We're watching results as they're coming in tonight, while continuing to comb through various problem reports as they've been coming in throughout the day (the usual "hiccups" "glitches" "snags" and "snafus" reportage --- anything but the proper word for them all: "failure"!)

As we always find necessary to remind readers on such nights, the bulk of election failures tend to reveal themselves in the hours and days --- and sometimes even weeks --- after Election Day.

With that in mind, of the most potential note that we've seen so far today --- though mostly downplayed as minor "glitches" in most of the stories reporting them --- we've found reports of: Diebold touch-screen machine failure in OH's Montgomery and Greene Counties; new e-pollbooks failing in Suffolk County, NY; new Sequoia/Dominion optical-scan systems failing in St. Lawrence County, NY, and; Sequoia touch-screen failures in Essex, Somerset and Goucester Counties, NJ.

Fortunately, turnout has been light today, so the problems that have cropped up seem to have been handled by quickly replacing machines (a luxury available during slow, off-year elections when there are extra machines to go around) or in such a way that delays --- and the voter disenfranchisement that goes with them --- were minimal. At least as so far reported.

Whether any of the results tabulated in secret, with secret software, are actually accurate, well, that's anyone's guess as usual. In any case, we're monitoring, and will let ya know if there's anything you need to know about. Please feel free to let us know about anything you think we should know about in comments.

Other than that, we're just stunned that ACORN did such a terrible job, yet again, at "stealing the election" in New Jersey!

The BRAD BLOG covers your electoral system fiercely and independently, like no other media outlet in the nation. Please support our work with a donation to help us keep going (Snail mail, more options here). If you like, we'll send you some great, award-winning election integrity documentary films in return! Details right here...

It's Election Day today, but a 90-year-old Republican will not be voting after the ID nightmare she faced when moving to Virginia. As it turns out, her birth certificate did not match her married name (ya think?), but even though she also brought a driver's license, proof of her new residence, a Medicaid card and a bank card, she still had problems getting the state-issued ID she'd need to vote today in VA.

After several trips to the DMV, --- luckily she's able to get there, several times apparently, unlike many other 90-year-olds --- Jean Earley was finally able to get that ID. But this story has twist ending. Go read it.

I'm sure John Fund and all the other GOP voter disenfranchisers are delighted with themselves. No doubt they haven't been this pleased since keeping those 80 and 90-year-old nuns from voting in Indiana last year.

What "right" to vote? 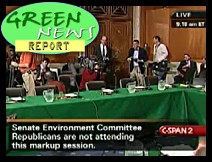 IN TODAY'S AUDIO REPORT: The clock is running out on the road to Copenhagen; Oil company slapped with record fine; Another toxic Chinese import? ... PLUS: Republicans offer a ruse to stall climate legislation ... All that and more in today's Green News Report!

IN 'GREEN NEWS EXTRA': Ski area joins fight against global warming; "Panic at 2 a.m.": The Search For Multi-year Arctic Ice; Deforestation sped demise of Nasca in Peru; China gets big stake in West Texas wind farm; Making Solar Power Mobile Power; Turning Algae Into Bioplastic Could Slash Petroleum Use by 50% ... PLUS: RFK, Jr. to Big Carbon: Your Day is Over ....

The Wall Street Journal's cowardly liar and "voter fraud" fraudster John Fund appears to be running out of fresh "voter fraud" lies to feed to Fox "News" viewers. According to Media Matters today, in advance of tomorrow's gubernatorial election in New Jersey, expected to be a very close race, Fund appeared on Fox's Glenn Beck show and related an anecdote of supposed fraud now going on in the Hispanic community in Camden.

"People are going door to door in parts of Camden with Hispanics that don't have very much knowledge of English, and they're saying, 'We have a new way for you to vote, la nueva forma de votar; just fill out these papers.'"

Trouble is, the incident that Fund claims is going on right now actually happened in Philadelphia 16 years ago, as even Fund himself admitted in his own WSJ column published just hours before his appearance on Fox today...

For various reasons, now seems a good moment to mention that The BRAD BLOG was honored this year with a prestigious Project Censored 2010 award for our coverage of the mysterious death of the GOP's IT guru Mike Connell. Connell, for those unfamiliar with the story (see background links at bottom of this article) was in the process of testifying about his rumored role in helping the GOP carry out fraud in Ohio's '04 Presidential Election when he was then reportedly threatened by Karl Rove. Weeks later he suddenly plunged to his death in a single-engine plane crash just before Christmas last year as he was preparing to land near Akron, on his way home from one of his frequent trips to D.C..

My colleagues Mark Crispin Miller and Larisa Alexandrovna and Muriel Kane were also honored by PC for their own coverage of the story.

Project Censored, based out of Sonoma State University, has been highlighting overlooked stories each year since 1976, and was recognized by Walter Cronkite as "one of the organizations that we should listen to, to be assured our newspaper and our broadcasting outlets are practicing thorough and ethical journalism."

Co-Editors Peter Phillips and Mickey Huff have been kind enough to offer us a number of signed copies at a reduced rate so that we can offer them as premiums to readers of The BRAD BLOG to help continue our work here.

If you'd like a copy of this great book (Makes a great holiday gift! I'll sign it as well, if you wish!), chocked full of important, overlooked stories from the last year or so, along with follow-ups to them --- and a lot of real information on the story of Election 2008 seen here for the first time in print --- please do one of the following:

Your support is greatly appreciated, and tremendously needed, as we receive no foundational or corporate support for our work here! Your contributions are largely the only thing that keep us going! So thank you in advance for any help here!

Links to The BRAD BLOG's most recent coverage of the Mike Connell story follows below...

What a weird life! In the 1970s and 80s I helped my late Evangelical-leader, Religious Right founder father as his nepotistic sidekick. We helped establish the Religious Right and send it on its merry way to doom. Now I --- a backslider former Evangelical, former Republican --- watch in amazed fascination as once again the Right I helped launch like a nasty little torpedo into the guts of the Republican Party once again explodes.