On today's BradCast, deadly natural disasters across the world and the potential for a man-made one here in the U.S., depending on the outcome of the November election.

First up today, the latest breaking news on the disastrous, deadly earthquake in Italy where, as of air-time, at least 159 have been killed; the horrific and even deadlier flooding in India, where more than 300 have died; and President Obama's visit to the site of historic flooding in Baton Rouge, Louisiana.

Then: Is voting for a so-called third party candidate in the November Presidential election tantamount to 'throwing your vote away'? That's a question confronting many U.S. voters who are dissatisfied with the two major party candidates. But does such a vote open the door to a deadly dangerous President Trump? And does it even matter if it does?

Historian and Salon columnist Matthew Rozsa, a Bernie Sanders supporter during the primary, joins me to discuss how American voters can take on the two-party duopoly, without taking the country and the world down with it, as discussed in his recent piece "Tired of Democrats vs. Republicans? Here's how to fix it".

Rozsa details what he sees as a moral case against Trump, that requires a vote for Clinton, even if his policy preferences are more closely aligned with someone like Green Party nominee Dr. Jill Stein. "When you juxtapose the possibility of a Clinton presidency with that of a Trump presidency," he argues, "you can see how policies they would implement on issues ranging from immigration, to taxes, to business regulations, would affect people directly. So when you say 'I don't see much of a difference between Clinton and Trump, and therefore I'm willing to risk the election of someone like Trump,' you are minimizing or ignoring how his policies would impact real people in this country."

But, he goes on to explain, there is a way to support third-parties in such a way that they can serve to crack the stranglehold of the two-party system and potentially even become viable at the Presidential level. "If you're going to try to empower third-party candidates, you shouldn't be indifferent for most of the four-year period, and then a few months before the general election say, 'oh, I don't like either of these alternatives, I'm going to vote third party to make that stance clear'. That doesn't accomplish anything. The way to really achieve this change is to be invested in the process constantly...even when it's not an election year," he says.

It's an interesting, detailed and history rich conversation, in which Rozsa and I disagree on a few key points, while agreeing on others. Please give it a listen and share your thoughts in comments.

Finally, don't count your chickens yet, Democrats. Trump regains the lead over Clinton in swing-state Florida, according to a new poll [PDF] out today from the Sunshine State...

On today's BradCast: Day One of Donald Trump's Republican National Convention in Cleveland was insane. But it was all going well enough until it became apparent late on Monday night that portions of Melania Trump's headliner speech was plagiarized directly from Michelle Obama's 2008 Democratic convention speech.

Incredibly, the man who made 'You're fired!' a catch phrase can't seem to muster up the ability to hold anyone in his own campaign accountable for it. As such, the oratorical fraud and, more importantly, how its being handled (and denied) by Team Trump, offers a stark warning to voters as to how a Trump Presidency might handle the actual serious issues and difficult decisions that need to be made.

Or, at least, it should.

Speaking of warnings, new national polling remains tight between Trump and Hillary Clinton, who continues losing ground in several of them. That, as several new cases and disturbing allegations of voter registration fraud by Republican election insiders in a number of states, along with some very troubling news from the U.S. Dept. of Justice concerning their plans to no longer send observers to polling places in certain jurisdictions with a history of racial discrimination, should serve as yet another stark warning for American voters...

All of that and Desi Doyen with today's Green News Report on the latest BradCast...

Welcome aboard to the GNR's newest affiliate partner, The Thom Hartmann Program!

IN 'GREEN NEWS EXTRA' (see links below): Scientists Turn Carbon Dioxide Emissions to Stone; Lights Drown Out Milky Way For Third Of World's Population; Arctic Sea Ice Breaks May Record . . . By A Lot; Supreme Court Rejects Challenge To Obama Mercury Air Pollution Rule; Idaho Superfund Site Is Still a Toxic Mess, With Legacy of Suffering; Is Coal Ash Killing an Oklahoma Town?; On Kodiak Island, Flywheels Are In And Diesel Is Out... PLUS: House Opposes Carbon And Oil Taxes In Symbolic Votes... and much, MUCH more! ...

IN 'GREEN NEWS EXTRA' (see links below): Exxon Investors Seek Assurance as Climate Shifts, Along With Attitudes; It's possible to charge electrical devices without wires. Soon it may even be practical; Science Education: Portland Does the Right Thing. The Right Freaks Out; Wildfire contaminants could sully Fort McMurray water supply; The Glaciers Will Melt, The Sea Will Rise Up; People may be breathing in microplastics, health expert warns; Al Gore: Donald Trump's position on climate change 'should concern everyone'... PLUS: Fate Of Poland's Primeval Forest In Balance As Poland Plans Logging... and much, MUCH more! ...

IN TODAY'S RADIO REPORT: The Pope's unprecedented call for action on climate change; The Right predictably freaks out; India goes solar in a big way; PLUS: Trump is running for president. It's no hoax! But he thinks global warming is... All that and more in today's Green News Report!

IN TODAY'S RADIO REPORT: Three more Republicans enter crowded 2016 race - we'll tell you their positions on climate change (even if they won't); Also, another Democrat jumps in; PLUS: May 2015 breaks new records for extreme weather... All that and more in today's Green News Report!

IN TODAY'S RADIO REPORT: Deadly, record deluges in Texas and Oklahoma; Deadly, record heat in India; Heat-driven wildfires in Canada shut down tar sands oil production; Farmers make concession in California drought; PLUS: President Obama moves to limit pollution in the nation's drinking water, Republicans are against it ... All that and more in today's Green News Report!

As its reputation goes to pot, it looks like Indiana's new "religious freedom" law has sparked up more trouble than even Gov. Mike Pence (R) expected.

That law - the Religious Freedom Restoration Act - generally bans state officials from burdening a person's exercise of religion, "even if the burden results from a rule of general applicability."

Opponents say the law blesses discrimination by business owners against people they dislike, with most news coverage focused on the possible effects on sexual minorities.

Bill Levin, founder of the First Church of Cannabis, believes his religion will help restore the state's reputation after an intense bout of bad press.

"I created the fastest-growing religion in America last week," Levin tells U.S. News. "I've got to cork the leak up that [Indiana Gov. Mike] Pence caused with love."

Levin says he and other church members "all smoke religiously" and says supportive attorneys are advising him. He's working to find a facility with a large sanctuary.

"We have people who will be pilgriming in from California, from Maine, from Florida," he says. "I planned this to be a small church of three to five hundred, but the numbers have staggeringly grown."
...
"Of course I'm going to test this law. I'm not going to test it, I'm going to beat it," Levin says. "We're building a church with the cornerstone of love, the way religions are supposed to be built." 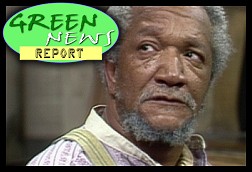 IN TODAY'S RADIO REPORT: U.S. pipelines now rupturing faster than we can keep track of them; So, U.S. Senate passes Keystone XL bill with Dem help; Obama's India trip a boost for US nuclear industry; IMF calls for end to fossil fuel subsidies; PLUS: Some good news: fracking banned in Scotland, and great 'Fox News' for a change!... All that and more in today's Green News Report!

IN 'GREEN NEWS EXTRA' (see links below): It's not too late to stop climate change, and it'll be super-cheap; Americans are out of step with science on pretty much everything; Climate models don't over-predict warming; Big Utilties' 'Kodak Moment': a phase-change builds; Air pollution plunges in AL; Feds open waters to largest offshore wind farm; EPA sued over industrial livestock pollution... PLUS: Oceans on the verge of a 'mass bleaching event'... and much, MUCH more! ...