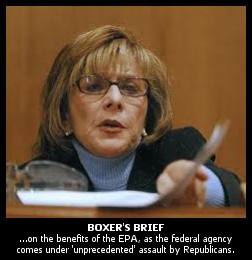 Contrary to the Republican Party's recently launched, all-out War on the EPA, the 40-year old Environmental Protection Agency, founded during the Richard Nixon Administration with strong bi-partisan support, is a job creator, according to a newly released report by the Majority Staff of the U.S. Senate Environment and Public Works Committee.

It also highlights quotes from radical leftists like George W. Bush's Republican EPA Director, Christie Todd Whitman ("[I]t is easy to forget how far we have come in the past 40 years. We should take heart from all this progress and not, as some in Congress have suggested, seek to tear down the agency that the president and Congress created to protect America’s health and environment.") and President Gerald Ford ("Nothing is more essential to the life of every single American than clean air, pure food, and safe drinking water").

The Democrats' report excoriates the deceptive partisan attacks embodied in recently introduced GOP House legislation meant "to weaken EPA's authority to regulate toxic emissions," and concludes by underscoring the EPA's role in promoting both environmental and economic health in the nation...

This November, California voters will be afforded a rare opportunity to directly decide whether to legalize and tax the lawful cultivation, processing, distribution, sale, and consumption of marijuana by and to individuals over 21 years of age.

By approving Proposition 19, formally labeled the "Regulate, Control, Tax Cannabis Act of 2010" [PDF], voters will take an important first step towards ending the costly, hypocritical, and liberty-destroying "war on drugs" which, like its predecessor (Prohibition), has created a lucrative niche for criminal organizations --- hypocritical because the covert agencies of the U.S. government have long engaged in drug trafficking in support of Empire even as the so-called "War on Drugs" has provided a convenient excuse for supporting brutal dictatorial puppet regimes whose function it is to serve the interests of what John Perkins described in Confessions of an Economic Hit Man as the "corporatocracy"... 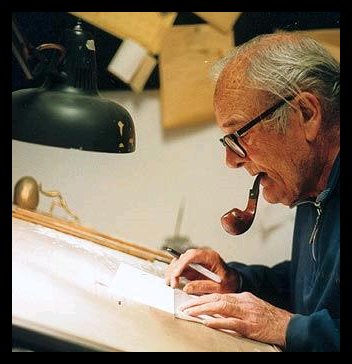 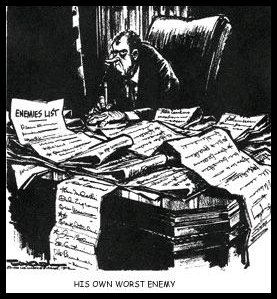 Paul Conrad, winner of three Pulitzer Prizes, whose poignant political cartoons were so effective in speaking truth to power that the criminal cabal inside the Nixon White House placed Conrad on its "Enemies List," has passed at the age of 86. Conrad regarded placement on the Nixon's enemies list as a badge of honor. He lampooned the ethically challenged former President in this biting cartoon.

We at The BRAD BLOG join with the Los Angeles Times in mourning the loss of one of the giants of 20th Century journalism.

Amidst exploding bombs, smoke billowing from sinking battleships and dead bodies floating atop the oil slicked waters of Pearl Harbor, it was not all that difficult to appreciate the damage wrought by a surprise attack launched by the Empire of Japan. The same was true when we watched in horror as the smoldering twin towers of the World Trade Center precipitously collapsed on September 11, 2001.

Like these two earlier pivotal events, January 21, 2010 is, "a date which will live in infamy." Yet, unlike Pearl Harbor and 9/11, most Americans do not recognize it as such. This attack came not by way of planes or bombs delivered by some foreign menace. It came from within courtesy of what Professor Cass Sunstein aptly described as "radicals in robes" --- four directly connected to the Robert-Bork founded, billionaire-funded Federalist Society; all five as appointees of the Reagan and two Bush administrations. Men bent on unraveling the very constitution they had all solemnly sworn to uphold.

Their assault, though subtle, wrought far greater devastation than either Pearl Harbor or 9/11. They did not merely attack planes, ships and buildings. They assaulted the very foundations of our constitutional democracy...

On Jan. 18, 2010 our nation will observe Martin Luther King, Jr. Day, commemorating the extraordinary life of an intellectual and moral giant. The corporate media will fill the airwaves with excerpts of his uplifting August 28, 1963 "I Have a Dream" speech in which Dr. King called upon us to judge one another by the content of our character and not by the color of our skin. And, during that same holiday, the corporate media can be counted upon to ignore his April 4, 1967 "Beyond Vietnam" speech just as they have every year since the first Martin Luther King, Jr. Day in 1986.

Why? Because the egalitarian principles enunciated in "I Have a Dream" challenged only the now (largely) defunct Jim Crow regime.

While de facto, race-based economic inequality stubbornly remains as a vestige of slavery and Jim Crow, the elimination of de jure segregation posed no threat to the stark economic inequality created by an increasingly brutal form of U.S. capitalism and imperialism. It was the brutal reality of corporate Empire which led Dr. King, in "Beyond Vietnam," to describe his own government as "the greatest purveyor of violence in the world today" --- a point which exposes the hypocrisy in that same government's celebration of the life of a man singularly devoted to non-violence.

If you have not read "Beyond Vietnam" in its entirety, you should. If you have, you should read it again, for Dr. King's message is as applicable today as it was then.

Particularly, as we deconstruct the empty words used by our Harvard-educated President to justify an escalation of what Robert Scheer aptly describes as a "War of Absurdity," and as we look "Beyond Afghanistan"...

Our favorite snippet from the latest round of newly-released Nixon tapes is one that is completely anachronistic now that such school of thought by Republicans has been thoroughly discredited in the wake of Nixon's disgrace. This quote from Nixon to Kissinger, from an Oval Office recording from December 14, 1972, has no relevance whatsoever to the current occupant of the White House...