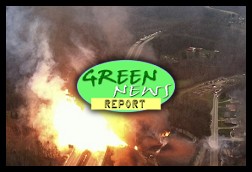 IN 'GREEN NEWS EXTRA' (see links below): No 'Get-Out-of-Jail-Free' Card on Sea Level; Colorado River water supply to fall short of demand: study; Hundreds rally against PacNW coal trains; Interior Dept. delays fracking rules; UK lifts ban on fracking; Feds open CA lands to fracking development; Is A123 battery sale to China a threat to US security? PLUS: Question posed at AGU: “Is Earth F**ked?”... and much, MUCH more! ...

Global warming induced climate change has given birth to a new social science: Agnotology. The Republican party features prominently in the study of ignorance.

Good points, Dredd - the burgeoning field of cognitive research focusing on the drivers of science denial has come up with fascinating insights on human nature and the human brain. Scholars & Rogues has this article on a new study examining Libertarians, engineers, and climate disruption denial: part 1 – libertarians: