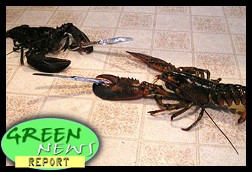 IN TODAY'S RADIO REPORT: Time's running for UN climate talks (and for the planet); Record winter heat blasts the Midwest (again); NY, NJ press for billions in Sandy disaster recovery; PLUS: Cannibal lobsters ... All that and more in today's Green News Report!

« PREVIOUS STORY "Republican Congressman on Susan Rice Witch Hunt: 'Maybe We Should Investigate Bush Too'"
» Go to The BRAD BLOG front page «
"Almost Half of GOP Voters: ACORN Stole It Again!" NEXT STORY »

True Story of Artificial Clouds A MUST READ!
http://www.youtube.com/w...ilpage&v=xx-STEA-Vqo

WHY AREN'T YOU LOOKING THIS UP AND ENDING THE GREEN NEWS FARCE? E.G. THE TRICK IS IF YOU WANT POWER AFTER THE COLLAPSE, GET SOLAR PANELS.

KESHE FOUNDATION MR AND MS JOURNALISTS
What you goin to do about that?
even if I CONTINUE to give you much love into the future?