Help keep The BRAD BLOG independent!
All of our work, including The BRAD BLOG, The BradCast and Green News
Report, is only possible thanks to contributions from readers and listeners!
Latest Featured Reports | Monday, October 3, 2022 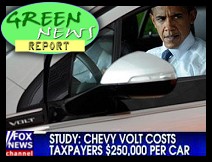 The republicans are right on the wind issue, maybe not for the right reasons. If you can google the actual power from wind, and the cost, you know why windmills went out some time ago. Mountains are shaved off just like with coal, concrete laid down, thousands of trees are being cut, birds are killed and the amount of power produced is a big secret. But presently it is about 20 to 30% of capacity. If we only worked that percentage at our jobs, we would be quickly fired. And just try and get the stats. from the federal energy regulatory commission on wind energy produced presently in the US . Good luck. Lots of trade secrets.

I'm sure Desi will have a more complete reply, though she may have tired of it by now, given that you say the same thing every time we cover a wind story. But just a couple of points:

If you can google the actual power from wind, and the cost, you know why windmills went out some time ago.

Weird. Every time I drive out to Palm Springs I see thousands of them running...not "out" at all. Why would that be?

You do realize that more birds are killed by housecats each year, right?

So what is the real reason you continue to object to wind every time we bring it up, Molly?

Molly, your anti-wind position simply isn't supported by the facts.

>Mountains are shaved off just like with coal
Um, no. They aren't. While there is some minor site leveling, Mountaintop Removal coal mining is vastly more destructive --- burying over 12,000 miles of streams in WV alone; poisoning drinking water; coal mining kills thousands of miners worldwide direclty in the mines, and later with black lung disease; and billions of gallons of toxic coal ash waste is stored permanently in massive pits that also poison groundwater. So how is that better than wind?

Iowa now produces 20% of its electricity from wind energy. On March 7 of this year, TX grid operator ERCOT used a record 7,599 MW (Google it. It wasn't hard to find at all.)

>But presently it is about 20 to 30% of capacity
The majority of conventional coal-burning, gas-burning and nuclear power plants run at only 50% or less of peak capacity for all but two or three days of the year --- the hottest days of the year, when wind and solar are putting out peak power.

For some reason, Molly, you've decided you prefer the national security risk AND transfering billions of dollars of American wealth to foreign countries to keep oil as our primary source of energy.

You prefer the destruction of our air, land & water in extracting and then burning fossil fuels.

You prefer to keep paying billions of dollars in external health care costs and cleanup of pollution.

You prefer to be a slave to oil. And for some reason you prefer to push us further down the dangerous path to catastrophic global warming.

Why is that, Molly?