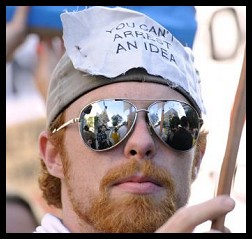 Los Angeles is no New York City. Following a torrential down pour on Wednesday, L.A. Mayor Antonio Villaraigosa sent a hundred rain ponchos over to those who had been encamped outside of L.A. City Hall since last weekend, as the core of the Occupy Los Angeles movement.

Later that same day, the Los Angeles City Council filed an extraordinary Resolution [PDF] in support of the L.A. "occupiers" and of the larger "Occupy Wall Street" movement as a whole.

The resolution, to be adopted "with the concurrence of the Mayor" (and supported by the L.A. County Federation of Labor), comes very close to a formal governmental endorsement of "Occupy Wall Street," a movement which Michael Moore describes plainly enough as "an uprising of people who have had it."

Amongst the powerful WHEREAS statements in support of the L.A. City Council Resolution, adopted "with the concurrence of the Mayor," was a recognition that "corporations hold undue influence and power;" that wealth disparity in the U.S. is greater than many of the nations in the Middle East that have been racked by "violent revolutionary protests;" that "our economic system" is "broken," creating an "economic crisis" that is "eroding the very social contract upon which the Constitution of the United States of America was founded"...

A comparison between the "Occupy Wall Street" Sept. 30 Resolution, developed by NY's Wall Street occupiers themselves, and the Oct. 5 L.A. City Council Resolution reveal that both are essentially saying the same thing.

The NY Resolution, which the L.A. City Council expressly references, notes that "no true democracy is attainable when the process is determined by economic power;" that, where "a democratic government derives its just power from the people...corporations do not seek consent to extract wealth from the people and the Earth."

The L.A. City Council Resolution contains a litany of the economic woes created by the vice-into-virtue, greed-driven policies of Wall Street and corporate America --- "over 25 million Americans who seek work are unemployed; more than 50 million Americans are forced to live without health insurance...more than 1 in 5 American children are growing up poor in households that lack access to resources that provide basic survival needs, such as food, clothing, and shelter."

The Council goes on to note that while worker contributions to the GDP "soared to 59%" over the past 30 years, "almost all the gains to the economy have accrued to the very top income earners --- largely the top 1%. The "400 richest Americans at the top control more wealth than the 180 million Americans at the bottom." It cited last year's infamous U.S. Supreme Court decision in Citizens United as a threat to "the voices of the people" and noted "widespread inequities in U.S. health outcomes by income, race and gender" occasioned by the highest "income inequality" amongst the world's "advanced industrialized nations."

The "fiscal impact of the continuing economic crisis," the Council Resolution adds, "is disastrous to education, public services, infrastructure and essential safety-net services that have historically made America successful." It points to the fact that, at 1.2 million foreclosures since 2008, CA accounts for one in five U.S. foreclosures, with a resultant $4 billion loss of property tax revenues and an estimated $17 billion in foreclosure-related response costs for state, local and county governments --- all as a result of the continued "use of flawed, and in some cases fraudulent" mortgage services.

Read as a whole, the Oct. 5 L.A. City Council Resolution is a testament to the utter failure of unregulated capitalism, not to mention the dismal future in store for all Americans if we do not undergo radical, democratic change in our economy and in our political system.

Here is coverage by citizen journalist Margo Paez', of InsightOutNews, of Day 6 of Occupy LA...

My prayers are with everyone involved in the OccupyEverywhere actions. I am sorry it took so long & so much damage, but we are finally HERE. Let's get the oars out & start ROWING... Thanks, Ernest. You again shine the light into the darker corners. I will be joining the Occupy Portland folks for a bit this weekend, and when I return to the Seattle area, I'll be there at least once a week. I'd love to do more, but that's what I'm able to do. I encourage everyone to take some time out & bring vegan pizza as well!!

The OWS demonstrators have broad based support without a doubt.

Next we must refine the tools and techniques to match the form of government and economy that is being targeted for repair.

There are many types of government:

(Who Are The Job Creators?). When our government slipped away from us, so did the economy, and so did the tools we are accustomed to using to fix a problem.

An example of a bad tool or tactic is to ask for better voting machines in an Autocracy.

If we are a plutonomy now, we need to know who the plutocrats are, by name and location.

If they rule, but congress and the president do not, the voting different people into or out of those offices will not work as a fix.

Any ideas for proper tools with which to fix a plutonomy, where the plutocrats are deliberately "not hiring"?

LA City Council is great but they do not say what is truly needed to restore the economy - End The Fed.

LA City Council is great but they do not say what is truly needed to restore the economy - End The Fed.

Okay. I'll bite. How does "End[ing] The Fed" restore the economy?

I left my cell phone at home by accident, but just got back from Occupy Portland. There were hundreds of people listening to speakers in front of some war monument. May our nation turn to honoring peacemakers. May we learn to turn these moments when the populace awakens into long-term change. Good stuff. Be well, all. The tide may well be turning. Get your oars out & paddle fast!!

Sophia, I was just in Portland all weekend, missed news of the protests. but I am back in the Seattle area and plan to be down at OccupySeattle tomorrow afternoon. Seattle's Mayor McGinn has taken great steps to show solidarity with the movement. http://mayormcginn.seatt...pdate-on-occupy-seattle/

Kuttner over at Huffpo sedd:


Populist rhetoric when angry people are in the streets demanding accountability for bankers is a start, but talk is cheap

The roller-coaster should be in one location, economic policy in another.

I can't protest away the proper procedure for balancing my check book, but perhaps I can, with a little help from my friends, protest away bad management at the bank.

But also maybe not.

Dredd, All movements must start somewhere. The civil rights movement began with one woman refusing to relinquish a seat on a bus, moved on to boycotts and demonstrations --- eventually leading to the Civil Rights Act of 1964 and the Voting Rights Act of 1965.

Kuttner is correct in noting that demonstrations are only a start. But those demonstrations have already drawn in widespread support from unions and, in this case, one of the nation's most influential City Councils.

The objectives of Occupy Wall Street far exceed a simple change in "economic policy." It arises out of the utter failure of the neoliberal model of corporate capitalism. If it is to succeed, Occupy Wall Street must become a vehicle not only for revolutionary change of our economic/political system but a fundamental change in how we view one-another --- a rejection of cut-throat competition in favor of res publica. In that context, we must re-examine the role of government and our relationship to a sustainable ecology.

As Gandhi put it, "We must become the change we wish to see in the world."