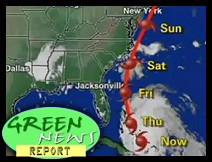 
MORRIS: If you dive into the weeds a little bit on this global warming thing, you see that it seems that facts are certainly on Huntsman’s side on all of this and fact checkers have come out, we’re actually having our own brain room look look at this right now that any of Perry’s comments don’t seem to hold a lot of water. It doesn’t matter. What’s resonating right now in South Carolina is helping Governor Perry tremendously and he fired back at Huntsman on global warming and gaining traction, facts or not.

« PREVIOUS STORY "Beck in Israel: 'To Overcome Fear We Just Need One Thing: Truth and Courage'..."
» Go to The BRAD BLOG front page «
"Sanders to Introduce Legislation to Ensure Social Security Remains Solvent for 'At Least 75 Years'" NEXT STORY »

Climate Change Facts:
- 25 years of wrong predictions
- All privately funded research is denial.
-All privately funded research studies causes.
-Almost all publicly funded research is believer.
-Almost all publicly funded research studies effects, instead of causes.
-Science gave us pesticides, germ warfare, deep sea drilling technology, cruise missiles and Y2Kyoto and they can’t be trusted.
-Every single consensus scientist has a different opinion of what the effects would be.
-Every single science organization has a different opinion of what the effects would be.
-There are tropical fossils under the “melting” ice and on every continent.
-Obama didn’t mention the “crisis” in his February State of the Union Address.
-Thousands of consensus scientists gave no response when Obama bailed on them.
-Thousands of consensus scientists vastly outnumber climate change protesters.
- Thousands of consensus scientists refuse to march en mass with the protesters and refuse to ACT like it is the emergency they said it was.
-Climate change wasn’t sustainability or pollution. It was a specific 25 year old CO2 death threat to billions of children
-Climate change was a tragic exaggeration.
-REAL planet lovers are happy a crisis was avoided.
-The new denier is anyone who still thinks there enough voters to vote YES to taxing the air to make the weather colder.

Oh, there you go again, Meme Mine. So how many sites did you spam this time with your same cut-n-paste diatribe?

Thanks again for proving our point: the anti-science climate change deniers and their billionaire funders in the fossil fuel industry have nothing to back up their attack on the scientific consensus of human-caused climate change but fever dreams and fact-free, incomprehensible rants.

For those who seek actual scientific evidence gathered and explained by actual climate scientists and not bought-and-paid-for denial industry trolls, please go to SkepticalScience.com.

Hey, Meme Mine, you forgot "the Earth is still flat".