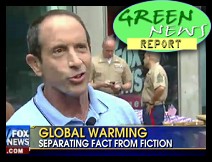 IN TODAY'S RADIO REPORT: Meet the nation's newest oil spill, now on the Yellowstone River; Global Warming takes much of the fun out of the 4th of July in the Southwest; Fox's favorite TV weatherman, Joe Bastardi says 'Why worry?; Could the environment be a factor in triggering autism?; PLUS: The 50 states are getting warmer (no, not just because it's summer!) ... All that and more in today's Green News Report!


"Greenhouse gases, there's another term for them: It's called plant food," Bastardi said. "Grill a steak, grill a hamburger and help the trees out."

Thanks for getting the word out that the Republican-controlled House of Representatives is more concerned about keeping tax breaks for the super-rich than funding important public health services, like checking for E-coli bacteria in the food, among other important governmental services, such as environmental controls. Europe just had a very bad case of this problem with quite a number of deaths involved. By the way, just a suggestion to increase your traffic, less photos of Breitbart's mug, and find an excuse to put some cute model, a la Lara Stone, on your site.