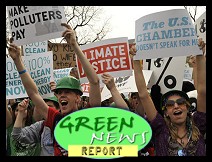 IN TODAY'S RADIO REPORT: Big victory for clean air in TN; Wildfire outbreak in TX; Tornado outbreak in the Southeast; Youth optimism outbreak in the nation's capitol, in the fight for a clean energy future; PLUS: Linked forever in history: Earth Day and the explosion of the Deepwater Horizon offshore drilling rig in the Gulf... All that and more in today's Green News Report!

2. Make a plan: Pick a BP station near you, and a agree on a meeting time and place with a group of friends. Agree on how you'd like to make your voices heard on Wednesday. [MORE]

There is a construction boom in nuclear power reactors in parts of Asia. Some of those reactors are built close to the sea in areas that are likely quite vulnerable to quakes and tsunamis.

CORRECTION: Our initial audio version of today's Green News Report had misstated the date of Earth Day (believe it or not!). In fact, it's this Friday, April 22nd. We've updated the audio report with the corrected date.