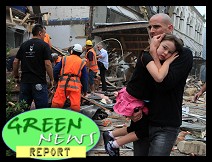 IN TODAY'S RADIO REPORT: Deadly earthquake in New Zealand; Aging dams at risk in the U.S.; 50 million environmental refugees by 2020, and other cheerful news from America's scientists ... PLUS: The WI gov's attack on labor and renewable energy, brought to you by the Billionaire Koch Brothers ... All that and more in today's Green News Report!

"In 2020, the UN has projected that we will have 50 million environmental refugees," Cristina Tirado, a professor at the University of California, Los Angeles, said at the annual meeting of the American Association for the Advancement of Science (AAAS).

"When people are not living in sustainable conditions, they migrate," she said, outlining with the other speakers how climate change is already impacting the amount of food we have --- food security --- and food safety, or the healthfulness of that food.
...
"What we saw in Tunisia --- a change in government and suddenly there are a whole lot of people going to Italy -- this is going to be the pattern," [Michigan State University professor Ewen] Todd said.

department may sell any state−owned heating, cooling, and power plant or may

contract with a private entity for the operation of any such plant, with or without

solicitation of bids, for any amount that the department determines to be in the best

purchase, or contract for the operation of, such a plant, and any such purchase is

walker is gonna give away the peoples power plants in Wi

http://environmentalmentalism.blogspot.com/
Climate Change was for gullible fools and we former believers now clearly see that “crisis”, “catastrophic”, “sever” and “unstoppable warming” were a climate cowards death threat. It was an embarrassing era of environMENTAL environmentalism and I wish I could take back the times I implied to our younger minds that “they“ will die on a dying planet from CO2. If any of you stay behind believers and your faded “worst-case-scenario profiting” scientists had any stones at all, you would call climate change what it was supposed to be, death. Not unpleasant weather. How is a little crisis possible anyways? History is not going to be kind to our Disco Doomsday Science and modern day witch burning and even Obama himself bailed on the “crisis” in his state of the union speech. Add to that, the Republican majority just voted to pull all American IPCC funding and there is wide spread talk now of arrests coming. Failed calls for crisis always back fire and now Obama and the press have a new enemy, those who led us to war against climate variation. A wave of former believer rage has arrived and I dare anyone to say unstoppable warming is absolutely true. It’s no different from any old freak standing by the side of the road holding a sign with THE END IS NEAR, SAVE THE PLANET scribbled on it.
Journalists and News Editors that covered the climate change mistake for the last two and a half decades of needless panic, have done to science and journalism, what abusive priests did for the Catholic Church. You lazy copy and paste clowns will sooner or later be charged with treason for leading your country to a false war of climate variation and for condemning our children to a death by CO2.
Meanwhile, the UN had allowed carbon trading to trump 3rd world fresh water relief, starvation rescue and 3rd world education for just over a quarter of a century of climate control instead of needed population control. Call the courthouse.
Pollution is real, death by CO2 was not.

Thanks for the info on Wisconsin, Karen. Please post a link here if you can find one on that news story.

[On edit, I see that you posted the link in the first comment. Thanks! Here's more: The other part of the Scott Walker plan: Firesale of Wisconsin state assets (Daily Kos)]

LOL 'meme mine' --- talk about "lazy copy and paste clowns"! Having seen your identical BS comments pasted over and over and over again on environmental science sites around the internet, you oughtta know!

So, 'meme', how much are they paying you to dump your pollution all over the place? But ya know, if you're just going to cut and paste your same comment everywhere, your masters should get a refund.

Fact-free gibberish is "meme mine's" specialty, folks. But ol' meme-y has really gone off the deep end this time.

For all those whose sanity and integrity are intact, learn more about the scientific evidence underlying climate change, at SkepticalScience.com, a full database of every single stinky denier argument, with easy-to-understand explanations using the primary scientific literature (instead of the unhinged excrement posted by paid troll-bots like meme mine).

You'd think for all the money the dirty energy industry pays to spread disinformation, Des, that they could come up with someone who at least sounds more intelligent than the smelly, brown sticky substance "meme mine" deposited onto the pages of one of this nation's finest examples of thorough scientific reporting as the Green News Report.

If I were the dirty energy employer or lobbying group who paid "meme mine" to troll the internet in search of sites where he can take a dump, I'd demand my money back.

Girl Scout cookies too? I'll quit driving before I give up Thin-mints!

No need to, Colin! As the article linked above from Grist helpfully notes, it's already being done to good result:

T]he Girl Scouts’ British sister organization, the Girl Guides, have eliminated palm oil from their cookies, and are offering to help the Girl Scouts USA and Girl Guides Canada do the same. The English bakers also found, unsurprisingly, that replacing unhealthy palm oil with olive oil and canola oil doesn’t only save forests, it also resulted in a 60 to 70 percent reduction in saturated fat.