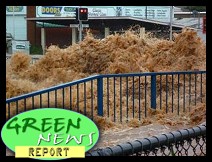 IN TODAY'S RADIO REPORT: Australia is drowning... so is China... so is Brazil; EPA smackdown on Mountaintop Removal coal mining; Still more on the BP Oil Disaster in the Gulf ... PLUS: It's official: 2010 was the hottest year on record .... All that and more in today's Green News Report!

It’s the first time that EPA has used its veto authority under the Clean Water Act to stop a project that has already been approved. The project was approved in 2007 by the U.S. Army Corps of Engineers, but has been caught up in litigation for years. It's also the latest move by the Obama administration to turn a critical eye toward mountaintop removal mining.

NOAA is the same organization that was found to have temperature readings in the hundreds and thousands of degrees, and was fudging temperatures upward for vast swatchs of high latitude areas where there were no available readings. What's more, the average temp. claimed is for land temperature, which is only ~27% of the earth and on which temperature is almost always measured in urban areas. Instead of accounting for the urban heat island effect, rural stations are adjusted upward to match the urban recording stations.

In other words, it's only warm because it's in the interest of alarmists to claim it is; not because the actual temperature has, to paraphrase Professor Jones of the CRU, not warmed since last century to any statistically significant degree.

Feel free to share your "evidence" for your claims (which you may have trouble doing). I'd counter them right now, but don't have time to track down the evidence to help you understand how you have been conned. On all counts. No doubt Des will be here later to do so. Just a guess.

Here's a quick response, however, to debunk your "urban heat island" myth: http://www.skepticalscie...n-heat-island-effect.htm

As to your zombie denialist argument about it being "only warm because it's in the interest of alarmists to claim it is" --- well, golly, there sure much be a lot of alarmists, since 97% of the world's thousands and thousands of climate scientists who have been working on this for decades all agree with the thermometers (of both land and ocean) that the globe is warming --- and precipitously, at that.

But you may want to inform the rapidly melting ice caps and quickly acidifying oceans that they are just being alarmist! Seems they haven't gotten the message!

LOL, Pelicanman. NOAA measured temps "in the thousands of degrees"?!?! That's one of the most hilarious denier claims I've heard yet! Thanks for the laugh.

For the facts, you can debunk yourself at SkepticalScience.com, as Brad suggested, where you can learn where the real gaps in the science are. And there are gaps --- just not the ones you think....but I suspect you're not actually interested in fact, perhaps because you're scared that somebody's going to take your Xbox away or something.

While you're looking for some supporting evidence for your claims (science-based, please, preferably primary scientific literature), do tell us how your friends in the climate change denial industry explain away accelerating ocean acidification these days....

And no, you've got it completely wrong on Professor Phil Jones --- nice work! Go debunk yourself here: http://www.skepticalscie...l-warming-since-1995.htm

The fact that you use ridiculous terms like "denier" shows you cannot be reasoned with. No one is denying that the climate changes, just not going along with the ridiculous and unproven notion that a trace gas can tip the climate out of balance. Use of such terms indicates a fundamental shutdown of cognitive function, allowing you to dismiss anything counter to your misanthropic, Malthusiam religion of catostrophic Thermageddon.

The ocean acidification claim is the latest in the redefinition of the scaremonger industry's terms, from global warming, to climate change, then disruption, then "challenges," and on to this ocean nonsense. Fact is most of the coral in the oceans was formed at a lower pH than present, and both corals and marine calcifers have been shown to have neutral or positive response to far higher CO2 concentrations (Geology Magazine 2009, Iglesias-Rodriguez et al. 2008, etc.). Coral reefs need algae, which needs sunlight and CO2, and as CO2 concentrations have risen since the end of the Little Ice Age in the 1700s reef calcification rates have increased accordingly. Face it, CO2 is plant food and even reef and shell food. But it doesn't fit your sky-is-falling meme so it must be the opposite, an evil poisonous gas that has the mysterious power to cause women to put their hair in beehives and wear hoop dresses, or something equally catostrophic.

The fudged NOAA data is known as Satellite Gate and actually happened. Look it up.

Brad started out doing good work on election fraud, but is clearly a mere Bolshevist now.

And no, I don't watch Faux News or listen to Lush. I don't have a TV and do not reside in the USA. And I'd like a check for being part of the "denialist industry," thanks.

Pelecanman: Please explain why the word "denier" is a "ridiculous term" given the millions of dollars expended annual for purpose of "climate science denial" by the fossil fuel industry.

But perhaps a better phrase would be climate science denial-gate.

Still awaiting a link to your still unsubstantiated allegation that NOAA "fudged" its data.

Nah, Pelicanman, I didn't say you were a paid shill for the climate change denial industry --- but you should be!

Nice use of your thesaurus, too. We, the United States, have the technology and the ability to transition to clean energy starting TODAY. No "Malthusian blah blah Thermageddon" necessary, although that kind of alarmist talk sure does work on the rubes, doesn't it?

Unfortunately, your idea of what 'climate hawks' are really advocating is, like most of your claims, utter bullshit, too. Gosh, it would be nice if deniers out there actually gave more of a damn about their country's future than they do about their own selfishness. It's that selfishness that ensures dirty energy profiteers will continue to block innovation, and ensures the U.S. wastes this window of opportunity to dominate the clean energy economy, and continues to export billions of dollars to other countries for our energy needs. Only instead of OPEC oil, we'll be sending those billions to China to sell us back the technology WE invented.

Say, maybe you can explain why we are seeing what may be the largest mass coral death ever recorded in 2010? Coral: life's a bleach... and then you die

Yes, the study you reference (here's the link, since you failed to include it: Geology Magazine 2009, Iglesias-Rodriguez et al. 2008) shows that some corals thrive on increasing CO2. There are other studies as well that show that some species of shelled organisms develop stronger shells amidst acidification, but that benefit is counterbalanced by lower survival rates in higher ocean temperatures.

You are aware of the implications in the fact that not all marine species respond to changes in ocean chemistry the same way, right? ("Global phytoplankton decline over the past century", Worm, et al., Nature, 2010; "Marine calcifiers in a high-CO2 ocean", Nature, Fabry, 2008; "Climate, carbon cycling, and deep-ocean ecosystems", PNAS, Smith, et al, 2009) The "C02 is plant food" meme is cute, but inaccurate, and ignores the many, many other interlocking factors of plant growth.

I love the guys at SkepticalScience.com. They may be talking to you:

Could global warming be caused by natural cycles?

"What if global warming is just a natural cycle?" This argument is, perhaps, one of the most common raised by the average person, rather than someone who makes a career out of denying climate change. Cyclical variations in climate are well-known to the public; we all studied the ice ages in school. However, climate isn't inherently cyclical....

Yes, the climate always changes, but the change is always driven by something. The overwhelming evidence indicates the waste products of human activities are now doing the driving.

Seriously, next time you can save time by checking your arguments against the database. And please include links to the contrary studies you reference, so that others can evaluate those claims for themselves.

Based on your comments, though, it would seem that you're actually more afraid of what you perceive to be the potential policy responses. Which is why you catastrophize the totally achievable switch to a clean energy economy.

It's too bad, really. America used to be a 'can-do' country.