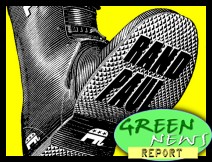 IN TODAY'S RADIO REPORT: The so-called "Climategate" scandal, one year later; Cholera epidemic spreading in Haiti; Jan.-Sept. 2010 still hottest ever; Oil spill response plans for Arctic drilling "thoroughly inadequate"; Looking ahead to the lame duck session, and a Republican majority in Congress; PLUS: Here comes the son...Rand Paul on which throats are worth stomping... All that and more in today's Green News Report!

This week marks the one-year anniversary of what the anti-science crowd successfully labeled 'Climategate'. The media will be doing countless retrospectives, most of which will be wasted ink, like the Guardian's piece - focusing on climate scientists at the expense of climate science, which is precisely the kind of miscoverage that has been going on for the whole year!
...
The last year or so has seen more scientific papers and presentations that raise the genuine prospect of catastrophe (if we stay on our current emissions path) that I can recall seeing in any other year.
...
1. Nature: “Global warming blamed for 40% decline in the ocean’s phytoplankton”:“Microscopic life crucial to the marine food chain is dying out. The consequences could be catastrophic.”
...
3. Must-read NCAR analysis warns we risk multiple, devastating global droughts even on moderate emissions path.: Dust-Bowlification may be the impact of human-caused climate change that hits the most people by mid-century...[MORE]

I found this awesome resource for sustainable/ green business owners it starts tomorrow but I believe it's ongoing... http://marketyoursustainablebusiness.com/

Renewable Energy Carbon Credits are a crock. Here is the way they work. Duke Power in NC uses a lot of coal fired plants. So they buy carbon credits from Texas wind farms which are not online. Our electricity bills go up. The coal fired plants keep up the good work..The environment is not helped one iota. It is just another way to squeeze every dime possible from the American poor and middle class.

The wind farm corporation , First Wind, recently tried to sell stocks on the open market. They stated that they did not have to sell power to make a profit. Their power purchase agreements with foreign countries do not require them to produce energy. So upper state NY and ME have two power plants that are not online. The blades turn though. And I'll bet the money from the carbon credits is turning too. Toward fat cats pockets.

And this is what you are supporting?

Molly, it would help if you actually listened to the reports first, and actually maybe even bothered to scan the links provided, before you comment.

Otherwise it's difficult to discern what it is you are talking about. There's nothing in this entire post that relates to wind energy or carbon credits, so the answer to your question is obviously "no".

Regardless, our readers are quite sophisticated and capable of reaching their own conclusions. Inclusion of any link here is for informational purposes only and does not constitute endorsement or support --- a point that I've made to you several times already. As your previous comments clearly show you have a very specific axe to grind, I suggest next time you include links so readers can get more information.