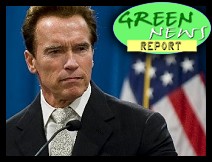 IN TODAY'S RADIO REPORT: Koala Chlamydia; Coal protests around the world; New Rules for offshore drilling; PLUS: The Governator slams Big Oil and corporate campaign cash ... All that and more in today's Green News Report!

« PREVIOUS STORY "WaPo STILL Misreporting O'Keefe/ACORN Story: He 'Dressed Up as a Pimp to Interview ACORN'"
» Go to The BRAD BLOG front page «
"CNN Declares BRAD BLOG 'Squeakiest Wheel on Subject of Voting' - So How About Some Grease?!" NEXT STORY »

Hey Des, your doing a great job here THANKS. Unfortunately, my outside reading has been limited with school but I ran across this:

and wondered if you'd seen it.

Thanks for the heads-up, Ancient. In that article, the reproductive problems sure do appear to be strong correlated to genetically modified (GM) crops used in animal feed, across different sources of GM feed (soy and corn) and different species (mice, pigs, cows).

The next task will be whether research can tease out if it's specifically the Roundup Ready gene that is the common denominator among these different sources, or some other biological agent at work. The experiences of the Iowa pig farmer (more on Jerry Rosman's story here) also highlight weaknesses in the production and distribution chain, and whether USDA oversight is enough to keep any feed crops not approved for human consumption out of the human food system.

With multi-billion dollar profits at stake --- and corporate spending on the mid-term elections at record levels in support of, shall we say, "likely GM-friendly" candidates --- it'll be interesting to see if funding for more research and more stringent oversight materializes at state and federal levels, especially the cumulative effects of GM crops on multiple generations.

The mid-term elections are Nov. 2nd. Choose accordingly, or the choice will be made for you.

(yes, I am well aware of the sorry state of our voting systems, but not voting guarantees you won't be heard)

« PREVIOUS STORY "WaPo STILL Misreporting O'Keefe/ACORN Story: He 'Dressed Up as a Pimp to Interview ACORN'"
» Go to The BRAD BLOG front page «
"CNN Declares BRAD BLOG 'Squeakiest Wheel on Subject of Voting' - So How About Some Grease?!" NEXT STORY »
See MSVL and support BRAD BLOG! Click here for signed premium version!