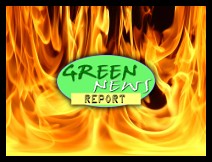 IN TODAY'S AUDIO REPORT: Scientists warn while Americans yawn; Climate Thunder Down Under: it's fire season again in Australia, while their debate over climate change heats up ... PLUS: Sarah Palin 'goes rogue' on science ... All that and more in today's Green News Report!

Global temperatures are on a path to rise by an average of 6C by the end of the century as CO2 emissions increase and the Earth's natural ability to absorb the gas declines, according to a major new study.

Scientists said that CO2 emissions have risen by 29% in the past decade alone and called for urgent action by leaders at the UN climate talks in Copenhagen to agree drastic emissions cuts in order to avoid dangerous climate change.