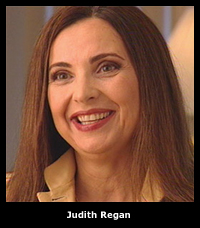 Judith Regan, the tough-talking former book publisher and editor and television producer, has accused an executive at Rupert Murdoch's News Corporation of encouraging her to lie about her affair with Bernard Kerik, the former New York City police commissioner, in order to protect the presidential aspirations of Kerik's friend, Rudolph Giuliani:

Regan makes the charge at the start of a 70-page filing that seeks $100 million in damages for what she says was a campaign to smear and discredit her by her bosses at HarperCollins and its parent company, News Corporation, after her project to publish a book with O.J. Simpson [titled, "If I Did It"] was abandoned amid a storm of protest.

In the civil complaint filed in State Supreme Court in Manhattan, Ms. Regan says the company has long sought to promote Mr. Giuliani’s ambitions. But the lawsuit does not elaborate on that charge, identify the executive who she says pressured her to mislead investigators, or offer details to support her claim.

In fact, the allegation about the executive makes up a small part of a much broader array of claims concerning what she says was her improper removal from a job atop one of the more commercially successful book publishing operations.

This story quashes any doubt which candidate the folks at NewsCorp are rooting for in the next election. Not that the revelation is particularly surprising. Giuliani is a close friend of Roger Ailes, the CEO of Fox News, NewsCorp's loss-leading marquee cable channel. With Rudy in the Oval Office, FNC's conduit into and out of the White House propaganda shop would be assured for four more years.

On a much more salacious level, even in the continuum of recent revelations of GOP adulteries --- think Sens. Larry Craig and David Vitter, Rev. Ted Haggard and publisher Richard Mellon Scaife, who funded the Arkansas Project to dig up dirt on the Clintons' marriage --- Regan's affair with Kerik was particularly sordid. While Kerik was hooking up with Regan, he was simultaneously having an affair with another woman, all while his wife was pregnant:

After the 911 attacks in 2001, Regan published a "sensational memoir" by New York police chief Bernard Kerik and began sleeping with him. They apparently used an apartment that had been donated to the city for use by emergency workers at ground zero, but which Kerik kept for himself. At the time, Kerik had another mistress, Jeannette Pinero, a married NYC Dept. Of Corrections officer, and Regan cut off the relationship after discovering that his wife was pregnant as well.

Thereafter, she told friends that he had begun to harass her, and that she hired a bodyguard for protection. Kerik's lawyer denied the harassment claim.

Kerik made headlines last week when he was indicted by a federal grand jury for conspiracy, mail fraud, wire fraud, and lying to the IRS. He pleaded not guilty to all charges. In December 2004, Giuliani recommended Kerik to be Bush's secretary of Homeland Defense, but Kerik quickly withdrew his name, saying he'd once hired an illegal alien.

As Keith Olbermann pointed out on MSNBC's "Countdown" last night, Regan better have strong evidence --- an audiotape, for example --- proving that the NewsCorp official pressured her to keep quiet about her affair with Kerik. Otherwise, it's hard to game out why she would put her credibility, such as it is, not to mention $100 million, on the line.

Here's some video on the Judith Regan story:

« PREVIOUS STORY "Reactions Counted at the Sold Out 'Uncounted' Premiere"
» Go to The BRAD BLOG front page «
"State Dept. Inspector General Appears to Have Perjured Himself Before House Committee Yesterday" NEXT STORY »

Hell hath no fury...
Geez, she got shtupped by both Kerik and Murdoch. What a career. Give her a dollar for the damage to her reputation, as shriveled as Rupert's pud..

Maybe Kerik was porking Regan, b/c he thought his wife was too fat b/c she was pregnant? Just askin'...

Between Kerik's indictment and this lawsuit I hope the Giuliani train comes to a screeching halt.

Catch this on Raw yet ?

Johnnie German admitted he was nervous as he used high-security codes to tap into the Harris County elections computer system last week and change some of the results manually.

Another story that needs to be diaried here, but I don't know where to send it:

Just more dirty tricks. I doubt it would be considered illegal.

It would fall back on the responsibility of the signer to read and understand what they are signing.

It is unethical for sure, but that seems to be the norm these days.

The author was smart and took the extra couple of minutes to inspect what he was asked to sign. It's too bad that people are in such a rush, as he points out, that they don't pay attention to such things.

The last Fucking thing this country needs is :