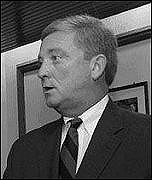 AP writer Joe Danborn has some other details, including:

The six-term congressman from Heath in central Ohio had insisted he would not resign even if indicted over his dealings with now-convicted lobbyist Jack Abramoff. In his first primary test in a decade, Ney won 68 percent of the vote May 2 against a little-known opponent.

However, he faced a tough challenge in November from Democrat Zack Space, who had made the Justice Department's investigation into Ney a focus of his campaign.

The Pittsburgh Tribune Review has more, including some quotes from an exclusive interview with Ney: Ney drops out of fall race

Ney has not been charged with a crime, and he insists he did nothing wrong. But his former chief of staff, Neil Volz, who left to join Abramoff's team, pleaded guilty in May to conspiring to use gifts and trips to influence Ney's official activities. Volz said he and other Abramoff associates provided Ney and members of his staff with free or reduced-price trips to England, Scotland and the Fiesta Bowl in Tempe, Ariz.

Who went on that trip to Scotland? Let's see ...

There's Tom Delay ... oops! He's not in Congress anymore, is he?

Then there's Bob Ney ... and oops! Soon he won't be in Congress anymore either.

Soon, the only one of the three who will still be in Congress is Tom Feeney. And we have to wonder how long that will last...

According to U.S. Department of Justice court filings, Ney in return met with the secretary of the federal Department of Housing and Urban Development on behalf of an Abramoff client, helped another obtain a Congressional Gold Medal, assisted another's attempt to obtain a visa and provided other assistance.

In May, the House Ethics Committee announced it was investigating Ney and Rep. William Jefferson, D-Louisiana, another lawmaker with Abramoff ties.

Abramoff is serving a 70-month prison sentence after pleading guilty in January to federal fraud and corruption charges related to the 2000 purchase of the SunCruz Casinos gambling fleet.

Ney is widely acknowledged as being "Representative No. 1" in court documents that detail spending by Abramoff, including a golfing trip to Scotland, a trip to the Super Bowl and campaign contributions.

Ney, who called Abramoff "dishonest and duplicitous," said he was misled by the lobbyist and his business partners.

What? Abramoff "dishonest and duplicitous"? Is there no honor among these thieves? Color me shocked!!

Ney was vague about his future plans.

"I have some options in the nongovernment sector," he said.

I'm sure he does. Bob Ney's credentials --- including his selecton by CREW as one of top 13 Most Corrupt Members of Congress --- will serve him well in the private sector.

Regular BRAD BLOG readers will remember that we have been covering this story for a long time now. For more background on today's news, start here.

Yes. Wondering why the fallout from the Abramoff thing is so slow? They are removing the offenders before they're brought down by the law. Mitigating damages. This means we have to work even harder to undo the ugly head trips making their voters keep voting against themselves.

And, these are not all southern bumpkins. Washington State has billboards up by fundamentalists and bumpkins against the Democratic Party. There are plenty of nitwits in California who vote to have their taxes lowered by $300 just to find that it lost them their jobs and left them with no safety net. It's a country-wide problem.

The corruption is just a relatively-small part of the problem. They are enabling far more corrupt men. Our government, and military, down into the ranks, need to be cleaned out badly. There are seriously dangerous people in key positions, doing the bidding of even more seriously dangerous people. So. Let them take down the obvious impediments to keeping power, we have to show the greater problem anyway, and this COULD work in our favor.

If you have time to listen to this Mike Malloy Show, I highly recommend that you do so. It could make all the difference.

I've been a big anti-fan of Bob Ney ever since I learned it was the House Administrative Committee, of which he is chair, that was sitting on the Rush Holt bill that would have outlawed the touchscreen voting machines.

The Senate version of the bill, the Clinton-Boxer bill, has been similarly stalled since the fall of 2003, and why these two haven't been screaming bloody murder about it since the spring of 2004 I can't fathom. Are they secretly working for Diebold or something?

Hmm. Could this be a sign that Ney is losing confidence in Ken Blackwell's ability to deliver the vote? Does he know something we should know???

Hmmmm..why do I get the feeling that there's even more about to hit the fan, and Ney's just trying to duck a little early?

No one quits unless he's in HUGE trouble! Who does the GOP have lined up to replace him?

Next will be a Feeney story. These 2 guys are like 2 peas in a pod...next thing you know, Feeney will drop out.

I'm sure everyone here knows about the Ney/HAVA connection, but for those who may not --- well Brad's been on it for a long time.

He better hope the judge lets the jurors smoke.

It'll be interesting to see if he shows up at the paper trial hearings promised for September pleading for that 900 million dollars again! I wonder if that request had anything to do with Diebold's stock climbing recently.

Will we see you in September Bob?

That was supposed to say paper trail, but some kind of a paper trial actually sounds better!

"Another one bites the dust" --- Queen