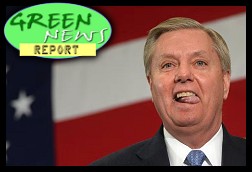 IN 'GREEN NEWS EXTRA' (see links below): Only 5 percent of plastic waste generated by US last year was recycled, report says; Secret files suggest chemical giant feared weedkiller’s link to Parkinson’s disease; Russia is destroying water/power infrastructure in Ukraine; Utilities sticking with fossil fuels despite climate pledges; How coal producers legally dodge cleanup obligations; Will new UK PM Sunak rebuild green agenda torn up by Truss?; More than half of bird species in the U.S. are in decline; Deforestation slowed last year, but not enough to meet climate goals; New European pipelines are hydrogen ready... PLUS: Inside the fantastical, pragmatic quest to make "hybrid" meat.... and much, MUCH more! ...

Senator Graham may have contracted toxoplasmosis from the Donald (On The Origin Of The Home Of COVID-19 - 34).