"We must face the truth," Andrew Hairston, Director of the Education Justice Project told the Advancement Project. "More militarized school environments do not address the root causes of mass violence." In fact, noted Jonathan Stith of the National Campaign for Police Free Schools, "Proposals that increase the presence of police, guns, and other militarized approaches to school safety only put gasoline on the fire."

The "truth" or "root cause" of mass shootings is precisely what Wayne LaPierre, the disgraced National Rifle Association (NRA) CEO/VP, sought to evade when, during his 2012 presser following the Sandy Hook Massacre, he ridiculously proclaimed that the "only thing that stops a bad guy with a gun is a good guy with a gun."

Anyone who suggests that safety is to be found in the mythical "good guy with a gun" has never served in combat.

In Vietnam, where I served (1968), we were far better equipped and armed than either the North Vietnamese Army or the Vietcong. We not only had ready access to our deadly M-16 Assault Rifles and other, even more powerful weapons, but also had the ability to call in artillery and airstrikes. Yet, that didn't prevent the deaths of 58,220 of my brothers-in-arms.

Proposals for armed school safety officers and arming teachers are but an extension of LaPierre's infamous and dangerous "more guns make us safer" canard.

Despite an increase in the number of school districts that deploy armed officers on campus, an academic study of mass shootings in the U.S. between 1980 and 2019, published last year by the Journal of the American Medical Association, failed to establish an "association between having an armed officer and deterrence of [school] violence."

Nevertheless, last month, over the opposition of educators, Ohio's Republican Gov. Mike DeWine signed into law a bill that will allow teachers, with some training, to keep a handgun inside their classrooms --- a decision that amounts to a fool's errand....

There are a multitude of reasons why arming teachers is a borderline insane idea.

For starters, as demonstrated by a disturbing 2009 ABC video (reposted below) which we covered in 2012 following the killing of 26 people (20 children and 6 adults) at Sandy Hook Elementary School, even after hours of training, teachers are unlikely to display the level of calm required to put down a gunman armed with a deadly AR-15 in the heat of the moment. Their attempt to do so can easily make things far worse and even more deadly. Indeed, even trained police officers make deadly mistakes when theirs, as well as the lives of others, are on the line. 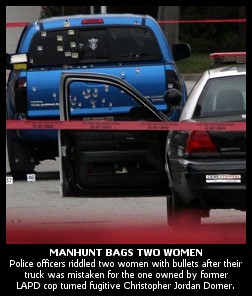 We illustrated that point in our 2013 coverage of a near fatal incident brought about by police.

Faced with the mistaken belief at the time that a pickup truck belonged to Christopher Dorner, a former police officer who had gone on an attempted cop killing rampage, nervous LAPD officers opened fire on a pickup truck that was being driven by two innocent women, who were simply delivering the Los Angeles Times.

There's a significant gap between the firepower of a teacher's handgun and the high-powered AR-15 rifle, used to massacre children and teachers at Sandy Hook (2012), Uvalde (2022) and elsewhere. The AR-15 is a semi-automatic version of the M-16 I used in Vietnam. It was engineered to inflict maximum damage upon human beings. The bullets fired by an AR-15 travel nearly three times as fast as handgun bullets and result in exponentially worse bodily damage.

In "The 'Good Guys With Guns' Keep Failing to Stop Mass Shootings", Time Magazine described a real world example of how a handgun bullet may not stop a bad guy wearing body armor:

In the May 14 mass shooting at a Buffalo, New York supermarket, Aaron Salter --- armed security guard and former police officer --- was hailed for his efforts at trying to protect others. At least one of his bullets hit the shooter, but the gunman was protected by an armor-plated vest and he fatally shot Salter --- one of 10 victims.

While armed teachers may not stop an active shooter, handguns in the classroom raise the unsettling prospect that a child might be struck down by friendly fire, as demonstrated in that 2009 video from ABC News.

But, of course, the real purpose of the "good guy with a gun" canard isn't the enhancement of public safety. It's evasion of the true source of America's endless carnage.

Any doubts as to the absurdity of the "good guy with a gun" canard were conclusively eliminated by MSNBC's Lawrence O'Donnell, during his recent coverage of the Uvalde School surveillance video released this week by the Austin American-Statesman.

O'Donnell, who contends that "police fear the AR-15", described the "terror" in a teacher's voice when she called 911 immediately after the gunman first fired his AR-15 before entering the school. The video depicts the gunman in the hall, opening fire into a classroom. The gunman moves out of view of the camera as he enters the classroom, but can be heard repeatedly firing his deadly military-grade weapon inside the classroom for what O'Donnell described as an "agonizing" three minutes.

The first police officers, sporting only handguns, arrived within three minutes of the 911 call. They ran down the hallway to the classroom door, and then, as O'Donnell reported, ran away as the gunman opened fire in their direction. Shortly thereafter, the hallway was filled with squads of multi-agency officers, each sporting tactical gear, body armor, their own assault weapons and shields. Instead of moving swiftly to confront the shooter as he continued to carry out the carnage, these armed "good guy" officers remained in the hallway over the next 77 minutes, waiting to get a clear shot if and when the shooter completed his mass murder spree and exited into the hallway.

While the sounds of the AR-15 could be heard on the video, it was a message, posted on the video by the Austin American-Statesman, that caused O'Donnell to break down in tears during his nationally televised broadcast. It read: "the sound of children screaming has been removed."

No doubt most Americans, like President Joe Biden, were "stunned, outraged and deeply saddened" by the senseless recent assassination of Japan's former Prime Minister Shinzo Abe. But one doesn't have to abandon that outrage in order to acknowledge that the event had a silver lining. Specifically, it resulted in mainstream corporate media comparisons between the U.S. and Japan, the nation that has the world's "most stringent" gun safety laws --- laws that forbid civilians to purchase and possess handguns, let alone military-grade assault rifles.

Unlike mass shootings in the U.S., which have been carried out via legally purchased, military-grade assault weapons, the Abe assassin used a crude homemade gun.

Ironically enough, Japan's strict gun laws are tied to a decision by U.S. post-World War II occupation forces to "disarm" the nation's civilian population. In a classic and controversial "do what we say, not what we do" moment, in 2008 the U.S. Supreme Court's right-wing majority overturned a District of Columbia safety ordinance that prohibited the possession of unlicensed handguns. Since then, U.S. "courts have been inundated with claims that various federal, state, and local laws regulating firearms violate the Second Amendment."

In 2021, according to CNN, there were only 10 firearm-related incidents in Japan, a nation of 127 million people. Those incidents produced a grand total of one single shooting death over the entire year.

It took 64-year old Stephen Craig Paddock just ten minutes to fire more than 1,000 bullets into a crowd of concert attendees at the Route 91 Harvest Country Music Festival in Las Vegas in October of 2017. Nearly an hour passed before SWAT teams broke into his barricaded hotel room where they found his cache of weapons, including fourteen AR-15s with high-capacity magazines. Sixty people died and 527 were wounded.

The killing of one man, Abe, sent shock waves around the world last weekend. In the U.S., where "mass shootings" are defined as a single incident in which three or more are killed, there are so many --- 314 between January 1 and July 5, 2022 --- that only the most heinous events give rise to public scrutiny.

Guns is just Snug backwards ... Happiness Is A Warm Snug