The award-winning Mann, author of The Hockey Stick and the Climate Wars

, offers a sobering explanation of the relationship between climate change and record flooding in SC. He also discusses what is actually meant by the phrase "1000-year flood", as so casually cited by SC Gov. Nikki Hailey (R) over the weekend, even as more than half of her state now faces unprecedented disaster.

"When you hear a statistic like that, 'it's a 1000-year event', that's based on the assumption that what's happening right now is no different from the sorts of things that were happening in the distant past, that the climate isn't changing. And it is," Mann tells me. "Climate change is very detectably increasing the likelihoods of precisely these sorts of events. Things we used to call a '1000-year event' become '100-year events'. And pretty soon, if we continue on the course that we are on, what was a '100-year event' becomes a '3 or 4-year event'."

Mann goes on to explain the climatic patterns that made the SC event possible, and how we are likely to experience much more of it in the very near future. "Part of the story --- and don't let anyone tell you otherwise --- was record heat in the Atlantic, which meant there was record moisture off the coast. And it's that record level of moisture in the atmosphere giving us these record levels of rainfall."

"There's no question --- what we're seeing play out is precisely what we warned would play out decades ago," he tells me, before discussing what we may be able to expect from this year's record El Nino out West, where the ocean is also at record temperatures amidst a "1000-year drought" here in California.

He also offers some thoughts on the new blockbuster report from Inside Climate News (as I discussed with the co-author of that investigative series last week), concerning Exxon's knowledge, as early as 1977, of the catastrophic dangers of man-made global warming, thanks to the use of their product and their subsequent about-face decision to fund climate change denialist organizations beginning in the 1990s. Man describes the opportuninty for Exxon to have led us to a scientific solution long ago as both "sad" and "tragic", among other things.

Also today: Updates on the closure of DMVs in Alabama for, purportedly, "budgetary reasons", even as the shutdowns will disproportionately affect the ability of African-Americans to cast a vote in the state and could cost more in the defense of lawsuits than is saved by the closures; New Mexico's Sec. of State Dianna Duran (R) is now facing a 65th(!!!) criminal count --- this one for identify theft and forgery --- as we are reminded, once again, why simply "trusting" election officials is not a valid option in our Constitutional representative democracy; And, finally, updates on last week's shooting massacre in Oregon and how Fox 'News' and the Republicans are still doing all they can do to do nothing at all to prevent more such massacres in the future... 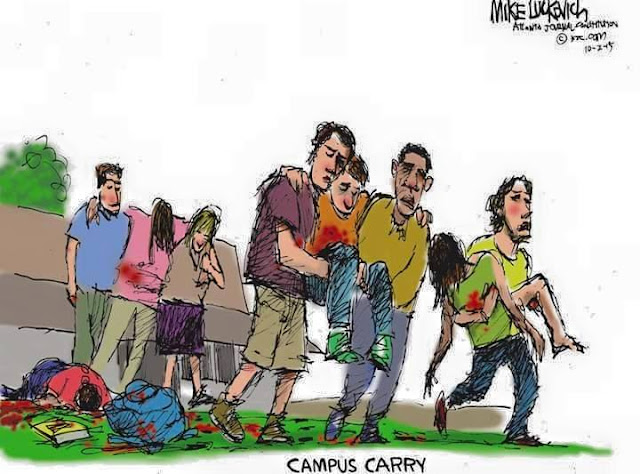 In the wake of the horrific mass shooting in Oregon on Thursday, President Obama asked Americans to address the epidemic of mass shootings, in part, by turning to the ballot box. We concur. And we've got a great idea about who to vote out of office first on today's BradCast!

Then: Are Muslims the new Catholics? Ben Railton, Associate Professor of English and American Studies at Fitchburg State University, joins us to discuss the historical parallels he recently documented at Talking Points Memo, between centuries of anti-Catholic sentiment in the U.S. and today's similarly toxic political rhetoric regarding Muslims.

2016 GOP Presidential candidate Ben Carson's recent assertions that a Muslim must "renounce Islam" before he'd consider them qualified to be President of the United States is just one example that echoes a similar sentiment about Catholics earlier in this country's history.

"It can seem like something 19th century, something really distant, but as recently as half a century ago, there was a pretty sustained debate in our mainstream political media, our body politic" Railton tells me, "of the genuine concern on behalf of many that any Catholic --- including John F. Kennedy, the candidate for President --- would owe a first allegiance not to anything within the United States, not to America, not to the American government or the American people, but to that entity, that foreign scary place, the Vatican and the Pope and the Catholic Church."

"Many of the fears that are directed at Muslim-Americans and Muslim communities are directed at the idea of these communities and their customs and beliefs, themselves representing an internal threat," he explains, while going on to remind us that, even with a well-established Muslim community in the U.S. at its founding ("We have Muslim-American communities going back to the Revolutionary Era...so fears of religious 'others' do date back to the very beginning"), this country's Constitutional framers determined there would be no religious test for the highest office in the land.

Railton's message is ultimately a very an encouraging one --- we have, it seems, finally moved beyond our fear of a Papal takeover in this country, after all, so we are likely to do the same with Muslims --- but is that historic comparison an appropriate analogue given the threat so many feel of an actual hostile takeover by Islamic extremists? We discuss.

Finally today, as ironic as it might be, the best news of all may well come from Desi Doyen and our latest Green News Report. How often does that happen?!...

We start today's BradCast with the grim news of yet another mass shooting, this time in Oregon, and a massive storm bearing down on the U.S. East Coast.

But we can do something about it. We can vote those folks out of office. But, of course, only if we're allowed to vote.

Today we discuss two states, specifically (and a few more, generally) controlled by Republicans where they are making it much more difficult for many of their voters to vote. First, the state of Alabama has announced it will shut down 31 DMV offices, after the state's new Photo ID voting restriction just went into effect last year. You'll be shocked to learn that the closures disproportionately affect voters in the state's "Black Belt", including the closure of offices in "Every single county in which blacks make up more than 75 percent of registered voters."

Then, in Iowa, we look at the ongoing legal challenge to the more than 100,000 former felons who have fully completed their sentences, but are being kept from voting for life by one man: the state's Republican Gov. Terry Branstad, who, by executive order, has rolled back Iowa's previous policy that had automatically restored voting rights to former, non-violent felons.

ACLU Voting Rights attorney Julie Ebenstein, who spent years fighting similar voter suppression tactics by Republicans in Florida, joins us on today's program to discuss the latest legal battle(s) for the right to vote in the Hawkeye State (and elsewhere).

"It's shameful the way that we treat our fellow citizens because of a prior conviction, sometimes decades ago," Ebenstein tells me. "The confluence of over-criminalization, mass incarceration, and the ongoing collateral consequences of that --- which is disenfranchisement, sometimes for life --- is something that really rips at our democracy."

It is shameful. As Think Progress noted earlier this year, "in the 2008 election, 5.3 million Americans, or one in 40 adults, were unable to vote due to a felony conviction, according to the Sentencing Project." But, as bad as that is, it's even worse for African Americans. "Nationally, 2.2 million --- or one in every 13 --- black adults is disenfranchised."

And as bad as that is, Ebenstein explains, it's even worse in Florida which, she notes, "like Iowa, has a lifetime ban on voting for people who have committed a felony. And, as a result of that, there's over 1.5 million citizens in Florida who are disenfranchised. So that's about 10 per cent of the voting population --- 1 in 5 African-American men in Florida --- who remain disenfranchised."

IN 'GREEN NEWS EXTRA' (see links below): E.P.A. to Unveil New Limit for Smog-Causing Emissions; Scientists declare an 'urgent' mission - study West Antarctica, and fast; Endangered fur seals dying on California coast; One of the World's Most Powerful Central Bankers Is Worried About Climate Change; EPA Overhauls Rules for Pesticide Use on Farms; AP Styles 'Deniers' into 'Doubters,' Creating Newsroom Skeptics... PLUS: Caution, Trolling Ahead: Fossil Fuel Advocates Are Hoping You Fail Their Latest Challenge... and much, MUCH more! ...