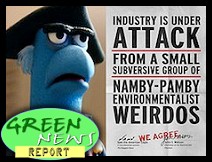 IN TODAY'S RADIO REPORT: Extreme weather in 2011 breaking records for record-breaking; Civil disobedience coming to the White House over Canada's Keystone XL pipeline; PLUS: TX Gov. Rick Perry thinks he knows more about climate science than climate scientists do...and the GOP candidates' attacks on the EPA may be costly ... All that and more in today's Green News Report! 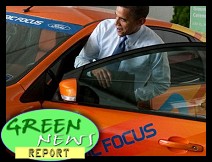 On Saturday we posted an article detailing the similarities, and apparent coordination, in misleading "Absentee Ballot Application" mailers sent out to Democratic voters by both the David Koch-founded Americans for Prosperity - Wisconsin and a mysterious group calling themselves United Sportsmen of Wisconsin.

The Americans for Prosperity mailer, sent out in Wisconsin last week in advance of tomorrow's state Senate recall election of six Republican state Senators, included instructions that absentee ballots must be submitted by August 11th --- even though the election in question is actually tomorrow, August 9th.

The PO Box described as the "Absentee Ballot Application Processing Center" on those mailers belonged to a Rightwing family group tied to the anti-abortion movement. A spokesperson for the group, as we reported, said that while they were part of a "coalition" with AFP, they claimed to have had no idea AFP was using their PO Box on the mailers until they started receiving them, and that they hadn't seen the mailer before it went out. For their part, AFP claimed the incorrect date was simply a "typo" in two districts where they had sent the mailings, and that "liberals" were making a "mountain out of a molehill" about it all. Late last week, however, in a followup mailing, the group admitted that it had gone out to "everyone" in all of the state Senate districts, rather than just the two where Democrats will face recall elections next week (as opposed to tomorrow's GOP recalls) and blamed the incorrect date on their printer.

The United Sportsmen of Wisconsin (USW) mailers, almost identical in form, font, content, and type-setting, as we showed, had no information about who had paid for the mailings on them, and instructed voters that they needed to return their absentee ballots to the elections clerk by August 4th --- even though ballots may be delivered to the Wisconsin election clerks as late as the close of polls on August 9th.

Since we ran our article over the weekend, which suggested, among other things, previously-undocumented coordination between AFP and USW, and since there was little information to be found about USW on the web, a number of readers have been digging in to try and figure out exactly who the so-called United Sporstmen of Wisconsin actually are, as have we.

And, whaddaya know, a bit of digging reveals that the group was very recently founded by one John W. Connors, a long-time staffer and director of Americans for Prosperity, a College Republican leader, and a rather prolific founder of a number of hard-right political front groups with a record of deception in recent Wisconsin elections...

No doubt by now you've heard of the deceptive absentee ballot applications mailed to Democrats in Wisconsin by David Koch's Americans for Prosperity, WI, as reported earlier this week by David Catanese at Politico.

As seen below, the mailer instructed recipients to return the application to the "Absentee Ballot Application Processing Center" by August 11th, even though the recall elections for 6 Republicans is next Tuesday, August 9th...

The wrong date on the mailing, however, was not the only problem with it. The address where the application was to be submitted is also a problem, but one that is worse than has been widely reported so far, according to some digging from a Wisconsin activist and election integrity advocate.

Moreover, a comparison to another absentee ballot application mailer from a different, supposedly unrelated, Rightwing group, suggests a coordinated effort by a number of these groups to defraud and disenfranchise voters in Wisconsin in advance of the unprecedented state Senate recall elections to be held next Tuesday... 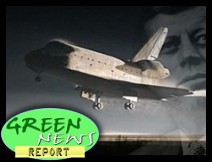 IN TODAY'S RADIO REPORT: Deadly heat wave in the Midwest; Deadly famine in Somalia; More American jobs in clean energy than in oil & gas; Meet America's newest oil spill, now in Alaska (Thanks again, BP!) ... PLUS: It's the end of the line for NASA's space shuttle program --- Can America still do Big Things? ... All that and more in today's Green News Report!