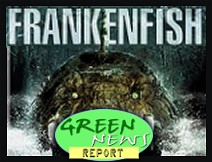 IN TODAY'S RADIO REPORT: Look out 1998 and 2005: 2010 shaping up to be hottest year evah; Coral reefs totally stressed out --- wouldn't you be?; More questions on the safety of Gulf seafood; Labeling "Frankenfish" ... PLUS: House panel investigates which came first: the chicken --- or the tainted eggs? ... All that and more in today's Green News Report!

Outpacing 2005, the hottest year on record, will be closer. In NASA's surface-based dataset, we are unlikely to set the record monthly temperatures for the rest of this year; last month wasn't close to the hottest August for NASA. We have entered a moderate La Niña, which NOAA says [pdf] is "expected to last at least through the Northern Hemisphere winter 2010-11."

Interestingly, while the disinformers have been breathlessly touting the La Niña as sure to cool things down rapidly, global temperatures have held up quite well, even in the satellite datasets, which are typically sensitive to the El Niño Southern oscillation (ENSO). The more trustworthy RSS data for August is not yet up, but even the UAH data for the lower troposphere shows August 2010 having almost an identical temperature to 1998, which was the hottest August on record.

« PREVIOUS STORY "Bev Harris of BlackBoxVoting.org Joins Me to Discuss Memphis Election Mess on KPFK"
» Go to The BRAD BLOG front page «
"True, Except for the Facts" NEXT STORY »