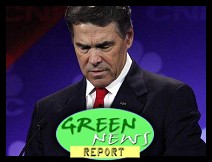 IN TODAY'S RADIO REPORT: Perry can't remember the name of the Dept. of Energy --- but wants to shut it down; BREAKING: State Dept. may re-route controversial Keystone XL pipeline; Australia passes world's first carbon tax; More wacky extreme weather in weird places; PLUS: IEA: 5 years to avoid the worst consequences of climate change ... All that and more in today's Green News Report!


The new regulations will impose a carbon tax on 500 of the country's biggest polluters starting in July, before becoming a market-based trading program in 2015. The size of the trading program would be second only to the European Union's.

Still, the chemical compounds the EPA detected are consistent with those produced from drilling processes, including one --- a solvent called 2-Butoxyethanol (2-BE) --- widely used in the process of hydraulic fracturing. The agency said it had not found contaminants such as nitrates and fertilizers that would have signaled that agricultural activities were to blame.

The wells also contained benzene at 50 times the level that is considered safe for people, as well as phenols --- another dangerous human carcinogen --- acetone, toluene, naphthalene and traces of diesel fuel.

The EPA said the water samples were saturated with methane gas that matched the deep layers of natural gas being drilled for energy. The gas did not match the shallower methane that the gas industry says is naturally occurring in water, a signal that the contamination was related to drilling and was less likely to have come from drilling waste spilled above ground.