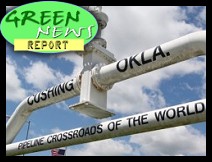 IN TODAY'S RADIO REPORT: Zombie Keystone pipeline rises again, as Obama fast-tracks southern leg; The Waxman cometh with a deficit-cutting carbon tax proposal, while the GOP protects Big Oil's billion-dollar subsidies; Exxon Valdez to the scrap heap of history; PLUS: It's World Water Day --- do you know where your clean water is?... All that and more in today's Green News Report!

Anyone have an observation or opinion on Thorium based Molten-Salt Reactors developed in the 1940's at Oak Ridge National Laboratory, but abandoned because they do not generate plutonium like Fukushima types do?

Dredd --- As far as I've been able to gather, thorium reactors are still not viable enough attract capital funding to get past the theoretical stage. It's difficult to find unbiased information on the current status of the research --- there are plenty of cheerleaders promising pies in the sky, but few people who appear to be actually building or testing them.

Which has to make you wonder --- with massive taxpayer subsidies shouldering nearly all the risk, why is the nuclear industry STILL not pursuing thorium, which its supporters insist is a near-perfect solution to the problems of the nuclear industry, and the world's energy needs? It doesn't add up. If you find credible info, please share!