Help keep The BRAD BLOG independent!
All of our work, including The BRAD BLOG, The BradCast and Green News
Report, is only possible thanks to contributions from readers and listeners!
Latest Featured Reports | Friday, October 7, 2022 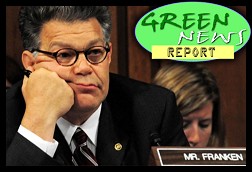 IN TODAY'S RADIO REPORT: Sec. John Kerry slams climate change deniers in government; More whistleblowers corroborate a Florida ban on 'climate change'; Solar energy is booming, in the good, non-explosive, jobs-creating kind of way; PLUS: Great news for the oil industry! Thanks to the oil industry, Arctic sea ice heads to a record low....All that and more in today's Green News Report!

IN 'GREEN NEWS EXTRA' (see links below): World record-breaking 8 ft of snow in 18 hours hits Italy; Scientists near breakthrough on artificial photosynthesis; Leaked emails reveal who' who list of climate denialists; India to hide pollution data from the public; Math and myth clash in Senate hearing on Clean Power Plan; The Hydraulic Hypothesis and the 'ends' of civilization; Plastic runs through everything; Farmers take up no-till agriculture ... PLUS: Unlike temperatures, climate change deniers falling fast... and much, MUCH more! ...

In Houston --- the laboratory of fascist government experimentation --- Big Oil is suing the city in order to weaken already-lame pollution standards overseen by a toothless state watchdog agency. (Hat tip to Texas Leftist.)

California only has one year’s worth of its water supply left, NASA scientist warns

The Decline of California Agriculture Has Begun

As goes California, so goes the nation IMO.