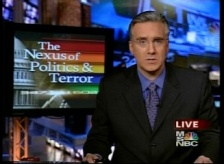 As we noted earlier, on tonight's broadcast MSNBC's Countdown presented a report called "The Nexus of Politics and Terror".

In a piece which mildly reminds us of the BBC series The Power of Nightmares (video here), Countdown host, Keith Olbermann, provides evidence that politicians may use the fear of terror attacks to accomplish political goals.

« PREVIOUS STORY "CIA Report Rebukes Bush Admin for Ignoring Pre-War Intel..."
» Go to The BRAD BLOG front page «
"Patrick Fitzgerald is Trying to Determine Whether Dick Cheney had a Role in the Outing of Valerie Plame!" NEXT STORY »

READER COMMENTS ON
"VIDEO - MSNBC Reports on 'The Nexus of Politics and Terror'"
(17 Responses so far...)

"BOO!!! Boogey man coming to get ya....pay no attnetion to those zionists or indictments behind the curtain....americans..."

I'm so shocked I can't believe it. (smirk)

Hello?
I was confused about the shades of TERROR!! after the 6th or 7th alert.
Why didn't Amerkins catch on? Duct tape and saran wrap will protect us from WHAT?

Oh my! This was on MSN??? I'm impressed. Only took 13 or so of them coincidences, not bad. Wow, I had never seen or heard that put together like that either, very well done. Thank you for the good news, David.

Damn them for crying wolf. Now if there ever is a true reason for our concern, pretty much for anything, we're not going to believe them. The little boy is a dumb shit. Sorry.

Well, Prime Time (tomorrow? or something) on ABC is gonna have a special where 10 college students got access into nuclear reactors..

Like you say, why are we not spending money on the "real" potential problems? why are we constantly talking the talk, but never walking the walk?

Pretty soon, the MSM might actually start asking "where is the wreckage from the Pentagon where the GIANT ASS PLANE hit, but left no rubble?" .. Anyone hear anything else about the "supposed arrest" of that chick that was on that plane? she was picked up over seas someplace or something?

There's no walk to walk. It is ALL talk. Mythical terrorists providing mythical data and intelligence about cooked-up plots, ploys, plans, schemes, and lies, lies, lies. You'd think that with a well like 9/11, the greedy bastards would find use for it in manipulation of public opinion/knowledge for years to come...guess they were extra thirsty, cuz it's about dry already. Maybe this whole thing will snowball soooooper-quick in the next month or so, what with some of the architects busy being caught and indicted/questioned/drawn and quartered--(whoops, sorry. My fantasies took over for a sec there...) for other things and unable to continue with such meticulous vigilance in covering their tracks with all the minutiae of details and subliminal window dressing that have kept their heads above the water so far.

Also, I love the commentary on the part of former Asst. Dictator General, and now the one and only Arkansas governor-hopeful officiallly-endorsed by the Reichstag, ol' whatever-'is-name-is (dunno if that's on the video or not, cuz it came after a commercial break...). He said that the way to be more credible with these things on the part of Big Brother is to give as much info as possible when issuing the alert to the public...words to live by, friends and neighbors. You don't have to tell the truth to be trusted...just hit 'em with a deluge of info and they'll believe it...I wonder if that'll work with cops on a traffic stop, too. I could augment my explanation of why I was doing 90 in a 35 with a dissertation on the decline of micro-economization in modern patriarchal societies and specific implications to the field of botany and biochemistry, given the idiosyncratic nature of...blah, blah, blah...

My, my. Another crack appears in the edifice. Everywhere you look, cracks. Humpty Dumpty in slow motion.

I was impressed by the "smart" nature of the program. He doesn't dumb things down or start screaming... he explains things clearly and with subtlety. If anything, a little cognitive complexity is exactly what each American needs... to vote, to get good jobs, to raise healthy families, to practice their faith.

So nice to have one news show that has actual news. Perhaps there is hope after all that more sheeples will start thinking and demanding answers.

We should remember that it was 60 Minutes (remember Rather) who first raised the question about the reality of serious terror threats and the political usage of them.

The crew went around and filmed their own entries into chemical plants (in heavily populated areas) which they were able to do unfettered. They could walk up to chemical storage tanks and touch them. If these tanks were ruptured in a bomb explosion MILLIONS could die quickly.

They asked if there is a serious threat why can anyone get to deadly chemical tanks easily?

So this is more good stuff Olberman is bringing up. The climate now allows it but back when Rather and the 60 Minutes crew did it they were targets of much wrath.

It is really a no-brainer that the propaganda arm of the MSM and the bu$hit neoCon fascists have used fear AGAINST AMERICA.

I read one account that said the New York subway terror alert came from Bloomberg. Bush said about the same thing: "Local officials issued the alert."

Nothing. Zip. Of course, when a terror alert is issued several days in advance, it gives any potential terrorist the same warning it gives the public. Has any terror attack followed closely upon a warning? Or have they all happened without warning, or weeks or months later (as with 9/11)?

Meanwhile, Bloomberg can take credit for keeping the pubic alert to "threats" during an election year.

Apparently there's a two-tier warning system for terror alerts. I wonder if the same thing happened for 9/11...well, of course it did. Dying because of a terrorist attack is for "the little people" (to quote a famous Rich woman - Leona Helmsley).

The issue of terror is given lop-sided coverage in the press.

One terror researcher gave a stunning portrayal of that before the National Press Club recently (link here).

They are without excuse. Probably they are in shock and cannot let their own world view and view of themselves to be challenged.

It could bring on a nervous breakdown for the body politic, so perhaps they see themselves as therapists who must protect their patient?

The problem with that is: they are the ones who produced the phony world view in the first place.

Several people have left the Bush administration. One of them thinks that admin may be terrorists.

Recently captured British AND American "special agents" captured by the Iraqi military or police, dressed as Iraqi's and both times with vehicles containing explosives and bad things, heading for a populated gathering. Both incidents of capture were followed swiftly with the respective countries having forces attack Iraqi police and forces to get them out immediately. Can't have THEM questioned. No time to negotiate, just take a bunch of tanks and level the [good, law enforcement, Iraqi's building, I point out] building to get them out. Now.

George Bush's grandfather, Prescott Bush, and the Bush family's direct Nazi ties. Guess those federal background investigations aren't what they used to be, with all the cutbacks and all.

Torturning prisoners and liking it. Threatening to veto his FIRST thing ever, our FY06 federal budget, just because it asks him to live by the laws of war this country has lived by before he was a glimmer in his great-great-great-great-grandaddy's eye. NO WAY do we American's stand for that. My son could get captured and THEN WHAT? Sorry idiots. I heard McCain talk about it on the senate floor. It made simple sense and it passed like 90-8 or something close to that. But Bush likes it and might refuse to give it up. Why are those poor jr. military in jail for doing what they were supposed to do? Bush admits that by HIM refusing to stop doing what they're in jail for. Just amazes me. They better not order MY son to do that!

Failure of taking care of our country's needs. New Orleans, not protecting them, for a major example. Running a joke of an administration. Giving Alaska $1 Billion this year for stupid bridges they don't even want, but denying New Orleans the other $50 Million or so it needed to keep work going earlier this year, to protect their lives, property and their city. I hope that billion dollar bridge, when completed, bridging those 50 houses on the island near Anchorage are greatful. So, YES to bridges the Chamber of Commerce doesn't even want going to 50 houses....but NO to ensuring the safety of an entire city and a million-plus people. Priority-challenged? Yes.

FEMA and the zillions of useless Federal agencies created to do nothing. The unqualified appointments. They would all fail, if directly challenged, I'm sure. Cronies. We're left to drown in our streets and wait weeks for help from natural disasters. He gives our money away to every other nation but our needy.

The bullshit terror alerts and warnings. The bullshit letters and other news reported, that always turn out to be fake, or oooops, wrong.

There's so much more, but this is too long as it is. If anyone else wants to list more, please do! Wake up America!!!

Is it madness or euphoria
facing off against devils,
enclosed within walls,
enduring winter’s siege,
a fortress becoming a cage
with emotions as jail mates,
clever companions able to seduce the psyche
with the ego’s games?


Danger lurks
if the mind is not aligned with the divine.
Stand ready in the realm of the real you,
demonstrating God’s attributes,
your Chi connected to the gentleness
of a lover’s lingering touch.


Defend from the vacuous urge
that tempts with empty threats,
baits with fear,
holding you down.

When love is so near,
reach for the high energy
of that angel’s rescuing hand
pulling you up.

Where the mind has been it can always go again,

to replay the soul’s travels to way back when,

to all those times we went to dark places,

as well as to those times we loved, and to those people we knew with friendly faces.

Go to heaven now; make that your choice.

A mind surrendered to the spirit can get it done.

The good, the bad, and the ugly, all transform into one,

into the beauty, peace, and stillness that is the essence of God’s son.

Go to the Golden Temple where lovers are there waiting,

to fill you up with joy, that satisfies unabating.