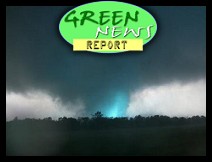 IN TODAY'S RADIO REPORT: Another day, another deadly outbreak of tornadoes in a record season; Japan admits three meltdowns and turns to solar; Electric cars for the federal fleet; PLUS: House Republicans hold disaster aid hostage ... All that and more in today's Green News Report!


The number and ferocity of those storms have been rising for at least 25 years. It's unclear what's causing the rise, but many insurers are responding by raising rates and reducing policies. Factors behind the damage could include expanded development and rising property values.

But some insurers also believe climate change is playing a part...

The year 2030 is quite near. Things associated with those dynamics will happen before that year won't they?

If Fox News gives you any grief, remind them of this link: Worse Than Previously Thought