ED NOTE: My dad previously guest blogged his amusing experience at the polls in St. Louis County during their primary election in August held on new touch-screen and/or optical-scan systems made by ES&S. Prior to that, it was reported he that he was instrumental in encouraging the county to not choose Diebold systems (they chose ES&S instead, for good or bad). Today, he shares his anectodes of again holding election officials' feet to the fire during the recent general election there. As he's never been an activist, or even political in anyway prior to all of this, I couldn't be prouder.

As I reviewed the St. Louis Post Dispatch on the day after the November 7th election, I was drawn to an article titled "Secretary of State Blasts County on IDs". The article said, in part:

The Missouri secretary of state says St. Louis County election officials may have confused voters — even intimidated them — by asking for identification that went beyond what is required.

Secretary of State Robin Carnahan's office notified the county as early as last week about her concerns and alerted the U.S. attorney's office, which handles voter obstruction cases.

The state Supreme Court last month threw out a law stating that a voter needed a photo identification to cast a ballot. But some county election workers still were asking voters on Tuesday whether they had a photo or signature ID. 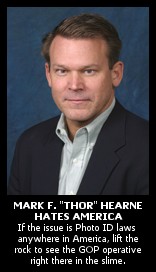 The article went on to say that "The St. Louis County Board of Elections, which oversees the largest jurisdiction of voters in the state, is appointed by Gov. Matt Blunt."

As BRAD BLOG readers may know, Blunt's right-hand man for years on voting issues was none other than "Thor" Hearne, the self-declared "non-partisan" founder of the American Center for Voting Rights (ACVR). The ACVR has been pushing for restrictive Photo ID requirement laws all across the country since the 2004 election. Most of those laws have been found to be unconstitutional, despite Hearne – the "non-partisan" who was the national general counsel for Bush/Cheney '04 Inc. – and the ACVR's continuing attempt to convince America that there is a massive problem with voters voting twice and illegal aliens voting and so forth.

After reading the article and talking to Brad about my election day experience, it seems that perhaps others might be interested in my interesting personal experience while voting during the November 7th election here in St. Louis County....

First let me tell you that neither my wife nor I received notification as to the location of our polling place or a voter card which we could normally simply bring with us to the polling place and which has always been considered proof of identification. Fearing that perhaps I had been dropped from the rolls I contacted the St. Louis County Board, gave them our names and address and was then assured that we indeed were both registered and many notification cards, for some reason, had apparently been lost in the mail. I told them that we had no drivers licenses (a fib) and asked what other type of identification would be acceptable. I was told that any utility bill would be acceptable identification. This would present a problem since all of the utility bills are in my name and none has my wife’s name on it.

I was then told that my wife could bring in any bank statement so long as her name and address appeared. I requested that they emailed or faxed me a copy of the various types of identification which were acceptable so that I could bring it along with me so as not to encounter a problem. I was told initially that I would receive a fax. Four hours later when I called I was told by another party that they did not have time to send me a fax but assured me that the poll workers were all aware of the proper allowable forms of identification. Thus armed with a bank statement, a utility bill and a copy of an article from the Monday [before the election] addition of KansasCity.com titled "Election chief concerned about voter confusion" I went to vote.

Upon arrival I was asked initially to show my drivers license.

I immediately handed the poll worker a copy of my utility bill with only my name appearing. My wife and I were standing together. The lady asked if this identification was for both of us. I said yes and she gave me two voter slips. Obviously neither of us appeared to be threatening to her (well-dressed, in our 60s and living in a nice area). We were sent on to the next station where we were asked "touch-screen or paper optical-scan?" We both choose optical scan.

Before leaving the area I returned to the first poll worker and asked why she had initially requested to see my driver's license, informing her that the courts had overturned that regulation. [ed note: Missouri's Supreme Court had recently found the state's new Photo ID requirement law to be unconstitutional.] She replied with annoyance “Ask my supervisor inside!”

Now to the next station where there was a line of about 6 people waiting to use the 5 paper ballot stations and no line for the 3 touch screen machines of which two were in use and one closed and obviously not operating.

While waiting, I asked to speak to the supervisor and was directed to a woman I would guess to have been about 70. I informed her of my conversation with the first poll worker and she said that she should not have been asking the question. I politely requested that she go and correct the poll worker to inform her of the correct procedure. She assured me that she would.

After voting (about 10 or 15 minutes later), I returned to the supervisor and asked if she had informed the initial poll worker as to the proper procedure. She said she had not yet had time but would indeed do so.

The poll worker in question said that she had been instructed to ask for photo ID in her pollworker training course!

At that time I scampered out to my car where my mortified wife had already taken refuge and thus our adventures at the polling place ended with no additional excitement or turmoil. The question I left with: Why were poll workers in St. Louis County instructed to ask for photo ID despite the Supreme Court ruling that it was unconstitutional to do so?

I later learned that even the Missouri Secretary of State, Robin Carnahan, was asked three times by a poll worker to give Photo ID when she went to vote in St. Louis County despite the court ruling against it.

I'm so proud of you Mr. Friedman! Your son, Brad is an amazing Patriot and now we know where he gets it!

Thank you for sharing your election day story, and for stepping up and getting involved! Little things like your actions probably saved problems for many the rest of the day.

All these little obstacles add up, amazing the Dems won anything. . .
Thanks Harvey for Brad !

Very nice and interesting article from a truly great father and son team.

However, I wasn't aware the optical scan ballot was optional for some St. Louis voters at the polls. Was it available to all Missouri voters or just St. Louis area?

My final question is which St. Louis counties had the paper optical scan option?