Today the hammer finally fell on New York as the DoJ did as they have been promising and filed a suit against the state for voting rights failures. Meanwhile in Pennsylvania the "Kuznick Suit" is being heard by the State Supreme Court. New Mexico Governor Richardson has sent a letter to officials in all 50 states to ask them to support an all paper-based voting system. And, finally, California got the Ciber ITA report from Diebold. It did not address the fact that 'interpreted' code is banned by the voting systems guidelines so, again, the ITA only did the bare essentials and did not do their job to ensure our voting systems meet all of the guidelines. ... 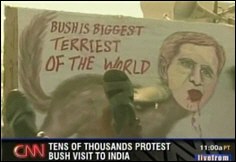 Local police report that "over 100,000" people protested Bush's arrival in India. American corporate media reports say there were "tens of thousands" of protestors.

More protests are planned for the duration of Bush's visit.

Received this note yesterday before heading off to Guest Host "The Young Turks". It's from Fred McChesney, co-host of the excellent "M&M Show", where I've appeared several times, on Air America Phoenix:

Today is KXXT's (Air America Phoenix) last day. Phoenix is getting its eighth AM Christian Station, starting tomorrow. Air America is off the air in Phoenix.

The KXXT website now has a thanks and farewell message from the now-former General Manager, who apparently had tried to save the station. It reads, in part:

You helped take an unrated, unprofitable AM radio station and pushed it to a tie for 3rd place out of 25 AM stations in Phoenix. You took that same AM station and made it profitable in less than a year and even after the sale was announced you stood by Air America Phoenix and we kept on making money even when our future was in doubt and we didn't know when our "plug" was going to be pulled. In fact, the last month we were on the air was the 3rd best month we've had financially!

Air America Phoenix has now disappeared into the ether and Phoenix is left with multiple Christian formats, some in English and others in Spanish, several "brokered' time stations (you know the radio stations selling you vitamins, good bowel movements and financial advice) a bagful of right wing "Conservative Talk stations" featuring Rush, Sean, Laura, Bill Bennett, Savage, Medved and all of their local imitators, three "Sports Talk" stations that live off the largess of their sister stations in the big corporate clusters that dominate the dial in Phoenix. Is anyone enjoying Tony Snow on KTAR…did anyone ask for him?

I welcome commenters here who have any suggestions about what --- if anything --- can be done about it.

UPDATE: The links to the KXXT webpages have now been removed. Unfortunately, I failed to cache them when I visited them. If anyone happened to cache those pages, please let me know, and I'll link to them instead. The message from the now-former GM, Bob Christy, can now be read in full right here. (Hat-tip to Zelph at Desert Rat!)

UPDATE 3/7/06: A campaign has now been mounted to get Air America Phoenix back on the air! They could use your help! 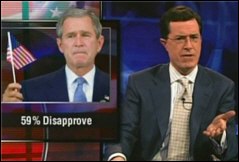 Stephen Colbert, in character as always, frowns on Bush's latest approval poll numbers. Highlighting a Scottish investigation into a Bush bicycling accident, Colbert reminds us of the many cuts, bruises and falls the President has sustained in past years.

Colbert offers the obtuse suggestion that Iraqi's problems could simply be solved with "Iraqi-Gras".