I'd say I was stunned to see a local TV news reporter --- any TV news reporter, frankly --- asking the President directly about his targeted assassinations of U.S. citizens, except that the reporter was Cincinnati Fox 19's Ben Swann.

Swann's reporting was key last February, in covering the Maine GOP's attempt to steal the state's caucuses for Mitt Romney, while largely everyone else in the corporate mainstream media had dutifully moved on to whatever the "next state" was at the time.

As Glenn Greenwald tweeted, here we find a "local anchor doing real journalism". Imagine that. Someone get this guy a network gig, please!

Here's his questions to President Obama last night on the U.S. drone strikes which targeted U.S. citizens Anwar al-Awlaki and his teenage son in Yemen, both without any form of due process... 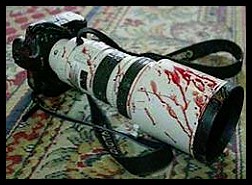 In "Plumbing the Depths of Lawless Executive Depravity", I argued that targeted assassinations threaten the very foundation of our republic. This occurs not only due to the potential for collateral damage but due to the distinct possibility that many whom we target as "suspected" terrorists may be entirely innocent.

A more recent article of mine here, "WikiLeaks' Pakistan, Yemen Cables Expose Unchecked Executive Power, 'Hatred for Democracy'" addressed a specific form of targeted assassinations --- the predator drone strike. In it, I noted that the secret expansion of such strikes into Pakistan and Yemen, as confirmed by diplomatic cables recently published by WikiLeaks and their media partners, reflected a dangerous usurpation of power by the Executive branch.

These two articles, and former CIA field operative Robert Baer, in a must-see RethinkAfganistan.com video (embedded at end of this article), assume the targets of the drone strike are suspected insurgents and terrorists. Both of them deal with the counterproductive effect of unintended civilian deaths ("collateral damage") which serves to destabilize "friendly" governments, provide a recruiting tool for those bent on revenge, and increase the likelihood of "blowback," a CIA term that describes "the unintended consequences of policies that were kept secret from the American people."

Have Baer and I erred in assuming these strikes are not aimed at civilians?...

Dear "Tea Party": Whether you know it or not, your founding father is below. If you are to be what you claim you are (what you've been told to believe you are), then pay attention to what Rep. Ron Paul --- who actually is --- said on the floor of the U.S. House this week.

If you really think you are "conservative", isn't it time you started acting like it? Like Paul (The Elder, unlike The Younger) has been doing now for years? Pay attention. This is for you...

"One of the major reasons for government secrecy is to protect the government from its own population...[The WikiLeaks cables reveal a] profound hatred for democracy on the part of our political leadership." -Noam Chomsky, Democracy Now, 11/30/2010 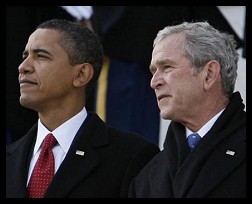 There is no issue of greater import to the aspirations of a democratic people than matters of war and peace. There can be no greater display of contempt for democracy on the part of an American President than that reflected by a covert decision to engage in a secret war without the knowledge or consent of Congress or the American people.

As late as 2002, George W. Bush felt compelled to seek some semblance of compliance with the War Powers Resolution of 1973, albeit via deceit in which false claims of Iraqi WMD and links to al Qaeda were presented in order to secure Congressional approval of the Authorization for Use of Military Force Against Iraq Resolution.

According to Jeremy Scahill (video below), "in '03/'04 the Bush administration issued an Executive order that authorized U.S. forces to go anywhere in the world where al Qaeda was to fight them; essentially declared the whole world a battlefield..."

The WikiLeaks Pakistan/Yemen cables confirm that President Barack Obama, possibly relying upon the Bush/Cheney cabal's extremist position that the Sept. 14, 2001 Authorization for Use of Military Force Against Terrorists ("AUMF") is tantamount to a blanket license to initiate wars anywhere and everywhere there is a "suspected" presence of al Qaeda, has both perpetuated and expanded these dangerous claims of lawless Executive power...

While that may be biggest "no, duh" headline ever for readers of The BRAD BLOG, happily it's actually news today at Washington Post [emphasis added]:

SANAA, Yemen --- In its strongest language yet, Yemen's government declared Thursday that there are limits to its military cooperation with the United States, warning that any direct U.S. action in this impoverished Middle East nation could bolster the popularity of Islamic militants.

"If there is direct intervention by the United States, it will strengthen al-Qaeda," warned Rashad al-Alimi, Yemen's deputy prime minister for security and defense.

Note to rest of media: Begin ignoring the above immediately. It never happened.