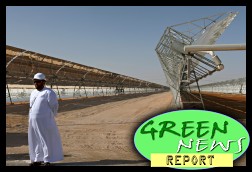 IN TODAY'S RADIO REPORT: On the one hand, Obama moves the environmental ball forward --- on the other hand... not so much; Oil leak in CO; Fish populations rebound (thanks, Big Government!); BP trial update; Abu Dhabi opens world's largest solar plant; Power failure at stricken Fukushima nuke plant; PLUS: Wind turbine sickness caused by anti-wind propaganda ... All that and more in today's Green News Report!

Nicely done Brad, thanks for the link to that Parachute Creek mess.

I live in upper state Maine...we have a lot of wind farms here. The first one built at the Canadian border, Mars Hill, caused so many complaints and illnesses , the corporation which built it constantly denied there was a problem. BUT the people who lived close to the wind farm who received a settlement had to never make a public statement about the wind farm again.

The wind farms near my house use more electricity than our huge hospital in Bangor and paper mills. Both use massive amounts of power. The blades turn at the same speed no matter how the wind blows.Often turn in a 3 on and 3 off pattern to keep them from freezing up...they only perform at less than 30% capacity. If you only performed at 30% of your stated capacity, would you go to the Dr.?

Propoganda indeed..but who is doing it? Think about it.The so called illnesses caused by propoganda are seizures, irregular heart beat, migraine headaches, insomnia and depression.Maine's power bills have gone up 19.5 % to pay for transmission lines to send the wind farm power out of state.(The power from the Mars Hill wind farm goes to Canada.) No transmission lines have been built. The turbines have a 20 year life span. The one near my house was finished in 2008.

Who pays for the wind farms? US taxes in the form of subsidies. You keep pushing wind farms. Doesn't look good.

Molly, we don't "push" wind farms --- we educate people about the need for non-carbon energy alternatives to the fossil fuels that are destabilizing our climate and putting us all on a path to a long unfolding disaster that will negatively, drastically affect the next 40 generations of humanity if nothing is done. That's our priority. What's yours?

To put it in the starkest possible terms: Extinction is not inconsequential to homeowners' perceived illnesses.

There is, as yet, no scientific substantiation of the illnesses that people say they are experiencing near wind farms. There is mounting evidence that such ailments are psychological.

That said, there are many academic studies and analyses that show strong regulation, oversight, and deep community involvement and engagement in the wind farm permitting process are key to preventing these issues from coming up in the first place.

The number one JOB GROWTH thingy was GREEN JOBS.

Still no photo's of your solar array...
still waiting for you yourselves to go green...

Dredd needs to look at the BLS table A
it's fucking 5th grade math!

Okey-dokey, "Blissful Ignorance", you've doing a nice job of spamming the comment threads. Your anonymous handle is exceedingly well-chosen, too.