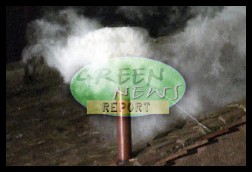 IN TODAY'S RADIO REPORT: Dept. of Interior expands solar - again; Dept. of Energy expands nuclear - again; Just what is in that pope smoke?; PLUS: Sean (& Yoko) Lennon have a (fracking) message for NY's Governor ... All that and more in today's Green News Report!

« PREVIOUS STORY "The Attorney of ACORN Worker Who Won $100k From James O'Keefe on Today's KPFK 'BradCast'"
» Go to The BRAD BLOG front page «
"Racist Fun at CPAC! Who Coulda Seen It Coming?" NEXT STORY »

Both monarch butterflies and penguins are edging toward extinction dangers.