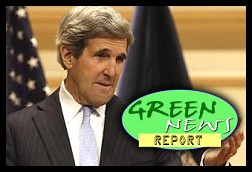 IN TODAY'S RADIO REPORT: Secretary of State John Kerry comes out swinging on climate change; BP off the hook again - for $3.4 billion; Genetically modified crops do not produce bigger harvests; PLUS: How secretive rightwing billionaires fund the climate change denial industry --- and get a tax deduction for it! ... All that and more in today's Green News Report!

« PREVIOUS STORY "Powell's Chief of Staff: Iraq Intel Was 'Outright Lies', But Powell Didn't 'Knowingly Lie' at U.N."
» Go to The BRAD BLOG front page «
"Can the Papal Election Be Hacked? Not Likely. They Use Publicly Hand-Counted Paper Ballots." NEXT STORY »

" It was documents obtained by scientist Peter Gleick" LOL a paragon of virtue.

"It was documents obtained by scientist Peter Gleick" LOL a paragon of virtue.


A scientist who posed as a board member of a conservative organization to gain access to its confidential information has been reinstated as president of the Pacific Institute, the environmental research organization that he founded in California. The institute said Wednesday in a statement that an independent inquiry had confirmed the account offered by the scientist, Peter Gleick, of the false pretenses under which he obtained documents of the Heartland Institute in February. The documents contained details about the budget, strategy and donors to the institute, which disputes that global warming is under way.

It is easier to perceive error than to find truth, for the former lies on the surface and is easily seen, while the latter lies in the depth, where few are willing to search for it.

Keep up the good work Desi, and remember that Doomers are the ones bringing doom, those who warn people of it are Public Servants of the good kind.

And do not hold back:


The two greatest myths about global warming communications are 1) constant repetition of doomsday messages has been a major, ongoing strategy and 2) that strategy doesn’t work and indeed is actually counterproductive!
...
These myths are so deeply ingrained in the mainstream media that such messaging, when it is tried, is routinely attacked and denounced — and the flimsiest studies are interpreted exactly backwards to drive the erroneous message home ... You’d think it would be pretty obvious that the public is not going to be concerned about an issue unless one explains why they should be concerned about an issue. And the social science literature, including the vast literature on advertising and marketing, could not be clearer that only repeated messages have any chance of sinking in and moving the needle

(Think Progress). Keep up the blunt truth so it overcomes the blunt lies.