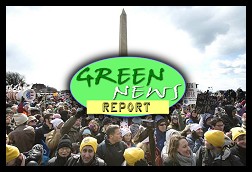 IN TODAY'S RADIO REPORT: All hands on deck (if not the corporate media!) for the largest climate rally in U.S. history... but is President Obama all talk and no action?; Secret memo reveals tar sands are poisoning Alberta, Canada; PLUS: Mayor Bloomberg's big plans to greenify NYC ... All that and more in today's Green News Report!

« PREVIOUS STORY "'Hubris' Isn't the Half of It"
» Go to The BRAD BLOG front page «
"'HUBRIS: Selling the Iraq War' [WATCH THE FULL DOCUMENTARY HERE]" NEXT STORY »

Davey - that's not really an 'alternate view'. The author of that post, a meteorologist (not an 'expert'), is criticizing the AP reporter, rather than the two upcoming studies in the article, which haven't been published yet. Those studies were done by actual atmospheric scientists. Maybe the meteorologist will submit his critique for peer review, as the actual atmospheric scientists who did the actual work on those two studies have done, and see how it stands up to the same scrutiny.

The Tesla/NYT fiasco should get its own article. It's certainly no surprise to regular BB readers to find all sorts of weasels scurrying around that sad excuse for a newspaper.

That means 80% of it is gone since then.

It is time we deal with Oil-Qaeda with felony indictments instead of the glib and uninformed Tete`-a-tete´ of unknowing people.


The five most devastating typhoons recorded in the Philippines have occurred since 1990, affecting 23 million people. Four of the costliest typhoons anywhere occurred in same period, according to an Oxfam report. What is more, Bopha hit an area where typhoons are all but unknown.

The inter-governmental panel on climate change says mean temperatures in the Philippines are rising by 0.14C per decade. Since the 1980s, there has been an increase in annual mean rainfall. Yet two of the severest droughts ever recorded occurred in 1991-92 and 1997-98.

Scientists are also registering steadily rising sea levels around the Philippines, and a falling water table. All this appears to increase the likelihood and incidence of extreme weather events while adversely affecting food production and yields through land erosion and degradation, analysts say.

(Filipino super-typhoon an ominous warning of climate change impact). It isn't all about "US" it is about all of us.

So, you are saying that 80% of the Arctic sea ice is gone? Please source your reference.

I'll look forward to your response --- to all of the data supplied by those scientific, corroborated, peer-reviewed findings from a number of different sources --- that will no doubt be a link to the discredited Anthony Watts! Thanks!

1. Since you slapped WUWT with an ad. hom, I donated $100 to him this morning! If you take a look at the data on AW sea Ice page, you can see that he does not attempt to hide the fact that sea ice extent, total ice, sea ice area, sea ice anomaly...is decreasing in the 30 yr span.

2. I will agree that between 1979 and 2013 various measures indicate a reduction in arctic sea ice. According to Schweiger, the 80% number is based on a model (PIOMAS) using the data from CryoSat-2, inter alia, which has been operating (three years this April). Here is what Schweiger said:

“The reanalysis relies on a model, so some people have, justifiably, questioned it,” Schweiger said. “These data essentially confirm that in the last few years, for which we haven’t really had data, the observations are very close to what we see in the model. So that increases our confidence for the overall time series from 1979 to the present.”

3. What is the correct amount of sea ice? What would gaia like to see? While you are at it, please tell me what the correct temperature of gaia should be? As you can see from one of the links above, the Arctic has been ice free during periods in the summer for over a thousand years.

5. I take issue with the use of "accelerating" in the Forbes article. What does it mean? Look at data between 1981 to 1987...that is accelerating as well but in the other direction.

6. It is interesting to me that there appears to be a systematic offset in these data starting when CryoSat started reporting. I am going out on a limb here, but I suspect we will see a correction after a few more years of data. Certainly this may not change the slope but it may put this "accelerating" issue to bed.

7. While plotting "anomaly" may paint a useful picture, I find that plotting absolutes informs much better. For example:
http://arctic.atmos.uiuc...S/seaice.area.arctic.png

8. Finally, I am not to blame for any Artic sea ice loss!!

My apologies. I included the wrong link. Good eye.

Here is a quote from the appropriate link:


CryoSat-2 measures ice volume using a high-resolution synthetic aperture radar altimeter, which fires pulses of microwave energy down towards the ice. The energy bounces off both the top of sections of ice and the water in the cracks in between. The difference in height between these two surfaces let scientists calculate the freeboard – the height of ice above the water – and then the volume of the ice.

The findings are the result of a huge international collaboration between teams from UCL, the European Space Agency, the Jet Propulsion Laboratory, the University of Washington, York University, Alfred Wegener Institute for Polar and Marine Research, Woods Hole Oceanographic Institution, Morgan State University and the University of Maryland.

The team confirmed CryoSat-2 estimates of ice volume using measurements from three independent sources – aircraft, moorings, and NASA's Operation IceBridge.
...
The sharp drop in Arctic sea ice area has been matched by a harder-to-see, but equally sharp, drop in sea ice thickness. The combined result has been a collapse in total sea ice volume — to one fifth of its level in 1980.

(On The Peak of Intelligence - 3). The Cryo-2 is a newer satellite.

Yes, I read up on CryoSat this morning as well as all of those other data they used to assemble the results reported. Overall, it looks like solid work except that I have deep suspicions about 'models.' Give the Sat some more fly time and lets see if the results continue to comport with the model. I believe the 80% number comes from the model because CryoSat has only been taking data since 2010.

I think this sums up Davey's approach to the uncomfortable implications of climate science and current observations:

That seems to be the primary motivation underlying all the unpaid, non-professional, non-scientist climate change "skeptics" and "deniers" that I see around the internets.

It's an understandable response to the uncomfortable implications of climate science, which, it must be emphasized, is the consensus among the global professional scientific community.

Davey, it's not an ad hominem attack to point out the debunkings of Watts' site by actual climate scientists. Surely you are aware of them? As flawed human beings, we are all susceptible to "motivated reasoning" and "confirmation bias", seeking out evidence that confirms our opinions.

The good thing about science is that it exists independently of our opinions. While there is uncertainty about the exact timing and magnitude of the impacts of burning eons of sequestered carbon and dumping CO2 into the atmosphere, there is no doubt of the physics and chemistry involved, at least among the professionals who actually have the training and education to evaluate the data, who say it is not a matter of "if" but a matter of "when" and "how much."

You can quibble about this study or that model, but in the end, opinions are irrelevant. As I have said before, such an approach fails on both risk management and on values.

It's interesting to ponder why anyone would want to cling to the idea that there will be no consequences to carbon-loading the atmosphere over mere decades, when the evidence continues to point solidly in one direction, and one direction only.

Davey is absolutely not to blame, and neither is the public.

I watch Oil-Qaeda very closely, and this is the guilt trip they are trying to hang on us: "We the public desperately want their oil, and as good peddlers they have to sell it to us. We made them do it."

But history says other wise (A History of Oil Addiction).

Thank you for making an excellent point.