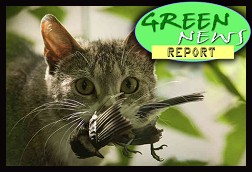 IN 'GREEN NEWS EXTRA' (see links below): Scientist: 69 ft of sea-level rise in motion; Opportunity costs to not using renewable energy; Breakthrough promises solar power cheaper than coal; Study: energy industry water use set to double by 2035; Alaskans try to flee climate change impacts; Fracking, now for uranium!... PLUS: How can Germany be both a green leader and remain an industrial powerhouse? ... and much, MUCH more! ...

« PREVIOUS STORY "NRA IN 1999: 'Background Checks for Every Sale at Every Gun Show. No Loopholes'; NRA TODAY: Background Checks Unnecessary"
» Go to The BRAD BLOG front page «
"Colbert Now Accepts Science of Climate Change, But 'Problem is Too Big to Cure, Just Give Up'" NEXT STORY »

It is refreshing when government officials get it and actually make rational plans.

Arctic methane increased in January 2013 as if we are in methane runaway mode up there.

« PREVIOUS STORY "NRA IN 1999: 'Background Checks for Every Sale at Every Gun Show. No Loopholes'; NRA TODAY: Background Checks Unnecessary"
» Go to The BRAD BLOG front page «
"Colbert Now Accepts Science of Climate Change, But 'Problem is Too Big to Cure, Just Give Up'" NEXT STORY »
See MSVL and support BRAD BLOG! Click here for signed premium version!