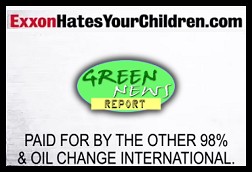 IN TODAY'S RADIO REPORT: Crunch time at UN climate talks in Doha; More dire warnings from the Arctic; Pollution regulations really do save lives; PLUS: Exxon hates your children (?!?!) ... All that and more in today's Green News Report!

Thanx you so much for your outstanding GREEN REPORT!!! ....And other blogs as well. If more people knew of your informative independent work, I really think they would appreciate it even 1/2 as much as me in a time in history when Obama's FCC appointed puppet is trying to secretly increase the powers of the big news corps....AGAIN http://billmoyers.com/20...ore-media-consolidation/ so all you would see and hear are the Jan Brewers.

The odds are 99.7% to 0.3% that 2012 will be the warmest year on record for the contiguous United States according to the feds.

The DOH! HA! summit is over with Bart Simpson results.