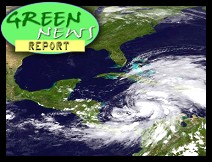 IN TODAY'S RADIO REPORT: Hurricane Sandy threatens East Coast, as new study shows increase in big U.S. hurricanes; Koch Bros, Big Oil trying to kill wind industry; Judge rules: no mutants in national forests (for now); Plastic pollution, now in the Arctic; Ozone hole shrinks; PLUS: Time is running out for the Great Barrier Reef - half has been lost in just 30 years ... All that and more in today's Green News Report!

IN 'GREEN NEWS EXTRA' (see links below): US gov downplayed effect of Deepwater oil spill on whales; Cute Solar Charging Canopies charge while parked; Did the climate deniers win?; US politicians duck climate change because of cost; US to study cancer risks near nuclear sites; Methane destabilizing off East coast? ... PLUS: Renewable energy: Mandate it in the constitution? ... and much, MUCH more! ...

They don't actually farm on wildlife reserves but they do plant corn for ducks and deer for instance. It provides both excellent cover and the American Indians grew long enough that it's really indigenous food for them ...

In case you haven't been paying attention nearly all field corn in the USA is GMO and Monopolized.... Judge is saying no to that which is a HUGE victory not just the environment but for 'breeders' and seed companies that do it the tried and true old fashioned way

GMO corn isn't about increasing yields/profits and I doubt eating it is dangerous. It's about Monopolizing corn. You monopolize the corn seed supply and hence the entire crop you also control the Ethanol industry, beef, pork, chicken and turkey markets .... That is what GMO is really all about, Monopolization of most of the food supply in one fell whoop. The biggest danger isn't health but the wiping out of many useful strains and varieties of corn, some hundreds of years old or causing a genetic anomaly that wipes out the entire species because it can no longer successfully reproduce itself which is a common effect of inbreeding which GMO corn is inherently

Wind farms are hard on the environment and people. Mountain tops are blasted and filled with concrete. Also hard on birds of prey.So hard that the wind farms have to pay scientists to make up reports for them...Only a small fraction of purported energy is produced for them. So all told..it is a negative. As Matt Taibbi says, Wall Street ends up making money off of Cap N' Trade. Nothing good for the environment. Here is an example of the effect of turbines on people.

A neighbour with whom she and her family had been friends decided to take advantage of the massive public subsidies for ‘renewable’ energy.

He put up a 64ft-high wind turbine which, though on his own land, stood just 300 yards from the Jackson family’s home.

The sleepless nights caused by its humming were only the start of their problems. Far worse was the impact on their health.
Aileen, a diabetic since the age of 19, found her blood glucose levels rocketing – forcing her to take more insulin and causing her to develop a cataract, she says.

Her younger son, Brian, an outgoing, happy, academically enthusiastic young man, suddenly became a depressive, stopped seeing his friends and dropped out of his studies at college.

A turbine beside a house near Hartlepool

Aileen’s husband William, who had always had low blood pressure, now found his blood pressure levels going ‘sky high’ – and has been on medication ever since.
So far so coincidental, you might say. And if you did, you would have the full and enthusiastic support of the wind industry.

A windfarm in my state finally made a settlement with the surrounding home owners.....Mars Hill ME. Of course, they are forbidden to talk about health problems and plumenting real estate values.

Maine has seen an increase of 19% of electricity rates to build transmission lines just for wind farms.

Groups like the Sierra Club have endorsed wind energy. Audobon club. Even though the environment is harmed by wind farms and birds are killed. In a SEC report by First Wind , they acknowledged that they may be sued for installing wind farms in migratory bird paths.

The reason that ME and NY are targeted for wind farms is also found in their SEC report. They do not have to produce energy to make a profit if they have an agreement with a foreign country. Canada borders both state. So the turbine blades are turning or they will be damaged by inactivity...no energy has to be produced. The tax payers and rate payers are paying for it all.The corporations are raking in the money.

Molly, you will feel a lot better after getting boinked by the O
http://www.youtube.com/w...;feature=player_embedded

Don't get worked about wind and birds and all that crap...it is the O!

Oh, and Molly, those wind turbines...http://www.youtube.com/watch?v=PuVOBSwNWbE&feature=youtu.be

Sea level rise around the globe is highest where Hurricane Sally is heading. And that area will have several high tides MON-WED ... add storm surge and it could cause serious flooding.

Will it affect the election?

Vote early. Polls may be hard to get to after Sunday afternoon - Monday morning.

Voting machines could be down ... flooding ... power outages could last a while ...

"GMO corn isn't about increasing yields/profits and I doubt eating it is dangerous."

I hope you'll take some time to read up more on this subject. Start with the recent rat tumor studies and continue on to the probable permanent genetic effects on consumers. Seriously. It may stop you from ever writing that sentence again.