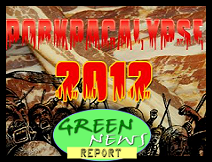 IN TODAY'S RADIO REPORT: Hey, fracking industry: you didn't build that, either!; Chevron caught cheating in SF refinery fire; Texas police Taser pipeline protesters; PLUS: BACONPOCALYPSE --- this time, global warming has gone too far! ... All that and more in today's Green News Report!

IN 'GREEN NEWS EXTRA' (see links below): Why is solar cheaper in Germany than the US?; Carbon tax could half deficit in 10 years; Obama must break 'climate silence'; EPA regs create $5 in benefits for every $1 in costs; Gov. Brown signs 'human right to water' bill; '100m to die' from global warming?; If US oil production is at all-time high, yet so are gas prices; Total Oil chief warns against drilling in Arctic ... PLUS: Obama vs. Romney: Stark contrast on the environment ... and much, MUCH more! ...

Interesting article re fracking contamination. This is quite a "hot potato" here in Queensland at the moment. Be interesting to see if any precedents are set and companies can be made to "fess up"!

The piece "Explaining the ’100 million to die from climate change’ claim (Grist)" should be called >Explaining Away the ongoing disaster happening NOW.

The one statistic that has been with the global warming induced climate change saga all along has been consistent underestimation of the current impact of the global reality.

The close second to that has been to call the consistent underestimations overestimations.

The denial beat goes on drummed up by fear.

Some problems with carbon tax as they now exist in New England.