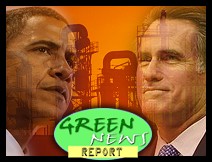 IN TODAY'S RADIO REPORT: Romney mocks climate change, while Obama doesn't, as the Democratic National Convention gets underway; Energy company CEO pushes for a price on carbon(!); Midwest drought now coming for your popcorn; PLUS: Speaking of 'popping' - Hurricane Isaac recovery, now with dead rats! ... All that and more in today's Green News Report!